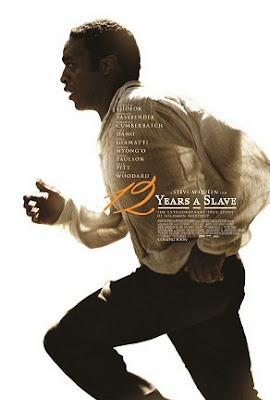 12 Years A Slave is the most intense movie about slavery that I've ever seen. It's based on the experience of Solomon Northup (played with real power and restraint by Chiwetel Ejiofor), a free black man living in Saratoga, New York with his wife and two children. Northrup is kidnapped and sent to Georgia where he serves multiple masters, ranging from passively kind but cowardly (Benedict Cumberbatch) to downright sadomasochistic (Michael Fassbender).

This film adaptation of Northup's experiences really puts his plight into perspective. You might say he'd been living an easy life up until his captivity, but seeing how the plantations work off the sweat and soul-crushing of other black people transforms him. And then there's the sheer ugly moral ambiguity of being a slave: do you run and abandon your fellow slaves? Do you put the ones who've been subjected to particular cruelty and torture out of their misery? Can you ever trust any white people, ever again? I found myself wanting Django to appear and slaughter all the slave owners, and as slowly and painfully as they had tortured their slaves.

But there's a problem for me with 12 Years a Slave: it's a harrowing, torturous movie, full of lashings and abuses that feel too real to watch. Obviously--they really did happen, and they really were horrifying. Sometimes the camera stops and lingers, forcing us to watch the lashings over and over, or poor Solomon being hanged, but low enough to the ground that he can just barely touch the muddy earth with his feet and keep his neck from breaking. It's like we're marinating in the awfulness of slavery. Is this punishment? Is this "good for us?" Is this real cinema, transcending the superficial limits of entertainment and instead treating us to some kind of moral cleansing? I'm not sure.

Thankfully, the performance of Chiwetel Ejiofor keeps the movie from turning into a total exercise in despair. As the years drag on, Solomon somehow manages to keep his wits about him, and he uses his intellect to stave off some of the abuse that others around him incur. (There is one scene where he beats the shit out of some trashy overseer, played by Paul Dano, and you don't want him to stop. You want him to beat the man into the ground and then start on the next person he sees with the same indignant ferocity.)

But it does mean that 12 Years a Slave often leaves the realm of 'entertainment' for the realm of 'message movie.' This is director Steve McQueen's attempt to demonstrate for us the horrors of slavery. And it is in turn horrific. Is it appropriately horrific? I suppose it is, in the way Schindler's List is appropriately horrific. It's not something I ever need to see again, but I'd refer anyone who wants to have some kind of visceral experience of slavery and how evil it is to this movie. This is a good companion (or should I say contrast?) to Gone With the Wind, with its decidedly rosier appreciation of the South pre- and post-Civil War.

And yes, I cried when he was reunited with his family. It was, again, very intense. Not for the easily disturbed.