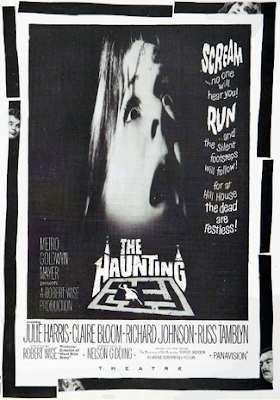 The Haunting (1963) is a somewhat labored but elegant ghost story, with the always annoying Julie Harris playing a nervous Nell type (and her name is really Nell) who's invited to participate in the research of a ghost specialist named Dr. Markway (Richard Johnson) at Hill House, which is the site of a number of supernaturally tinged tragedies. It's a finely made film, directed by Robert Wise with fluid cinematography by Davis Boulton, engrossing music by Humphrey Searle, and an impressive set design by John Jarvis. But Nelson Gidding's script, which he adapted from Shirley Jackson's neo-gothic novel The Haunting of Hill House (1959), falls short. It's overly talky, and once you get past the self-consciously hip dialogue it becomes rather tiresome. What kept me going was the atmosphere, which is admittedly creepy yet beautiful.

Harris' character is unhinged from the beginning (like any good Shirley Jackson heroine), and you know right off the bat that her being drawn to Hill House is no mistake. But her pathetic, emotionally needy performance grates on the nerves. Her repetitive inner-monologue goes something like this: "This is the first thing that's ever happened to me. I'm wanted here. I'm going to stay here forever. I'm accepted here." Nell is such a shaky, dithering bore of a character, and I was far more interested in Theo, the chummy, sophisticated lesbian and fellow ghost hunter (played with skill by the lovely Claire Bloom) she meets at Hill House. Richard Johnson is perfect as Dr. Markway: he exudes that serious intellectual quality you need for an educated witch doctor like Markway, and it's interesting to note that he played a doctor in another horror film, the Lucio Fulci walking dead opus Zombie (1979). Russ Tamblyn, as a likable but goofy playboy whose elderly aunt owns Hill House and who attends the ghost party to keep tabs on everybody else, rounds out the principle cast. He looks as though he were plucked from one of those Frankie and Annette beach party movies. His lack of seriousness lifts the film out of its perpetually gloomy nature.

The most exciting thing about The Haunting are the ominous opening titles and the accompanying narration (by Richard Johnson), which features the wonderfully uncanny opening line (slightly edited) from Shirley Jackson's novel. I enclose it here for the reader: "No live organism can continue for long to exist sanely under conditions of absolute reality... Hill House, not sane, stood by itself against its hills, holding darkness within; it had stood for eighty years and might stand for eighty more. Within, walls continued upright, bricks met neatly, floors were firm, and doors were sensibly shut; silence lay steadily against the wood and stone of Hill House, and whatever walked there, walked alone." Such brilliant writing. And visually speaking, the film does Jackson's elegantly creepy prose justice.

But there's a feeling of being gypped: you never really know if the ghosts are real or imagined. Viewers looking to get their money's worth in terms of shocks might be left wanting. But if you're interested in a more ambiguous psychological thriller with the "smells and bells" of the gothic, you'll might enjoy The Haunting. It was remade--with ghastly results--in 1999. Also starring Lois Maxwell as Dr. Markway's skeptical wife. 112 minutes. ★★½
by Jacob Lusk @ pannedreview
Email ThisBlogThis!Share to TwitterShare to FacebookShare to Pinterest
Tags 1963, Claire Bloom, Julie Harris, Lois Maxwell, Richard Johnson, Robert Wise, Russ Tamblyn