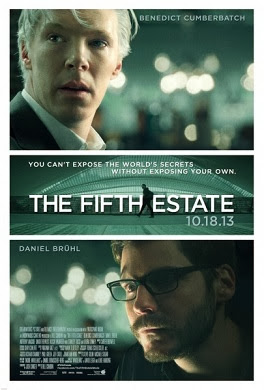 With The Social Network and now The Fifth Estate we're seeing the emergence of a new subgenre: the 21st century tech thriller. Of course, there were other techy thrillers before, like The Net. (Remember? Sandra Bullock's identity stolen via dial-up internet.) The Fifth Estate is about Julian Assange, the Australian creator of Wiki Leaks. In 2010, Assange became the source of great controversy when he leaked classified U.S. documents (including Afghan war logs and diplomatic communications). With all the hubbub about Edward Snowden's high-profile whistle-blowing this year, one can only imagine that he will soon get a techy thriller of his own, especially if The Fifth Estate does well at the box office (though we were an admittedly small audience in the theater tonight).

The Fifth Estate is an absorbing movie from start to finish: Benedict Cumberbatch possesses the necessary qualities to portray a high-strung mad genius. He's done it before as Sherlock, and his take on Assange isn't all that different from the opiom-charged London sleuth with more than a little contempt for the average citizen. Daniel Bruhl, as Assange's right hand man, and the moral conscience of the Wiki Leaks organization, is the Dr. Watson of the movie. He's also the film's best asset aside from Cumberbatch's wonderfully intense, electric personality: Bruhl's character is a serious but likable young man with a beard that makes him look like a German hipster teddy bear (that's supposed to be a compliment) and a valiant personal mission to maintain Assange's moral integrity. For those among us who find Cumberbatch's Assange fascinating but aloof, Bruhl gives us a hero to root for. Without him, this movie would not be as sympathetic, and without Cumberbatch, it wouldn't be as edgy.

We must credit the writer--Josh Singer, who based the script on two books, one of them by Daniel Berg (Bruhl's character)--with conjuring up a screenplay that's intelligent without being confusing. This is a (mostly) lucidly written film that gives us a good, dramatic story without all the jargon that often hinders movies about the Digital Age. Instead, both Singer and director Bill Condon focus on the moral imperatives at the heart of this story: freedom of speech and freedom of information.

But we're also privy to the moral mission of the U.S. government, which is understandably in a tizzy, concerned about not only the embarrassment of leaked diplomatic memos but also the potential harm that could come to various informants across the globe. (And of course, the allegations of improper military conduct look rather unflattering.) Laura Linney and Stanley Tucci play the State Department heads that are trying to clamp down on the information war, all the while aware that they're fighting a losing battle. Both of these actors carry the confidence of old pros, and they're fun to watch.

The Fifth Estate is a solid piece of Hollywood intrigue. I can't speak for the veracity of the film as far as the actual Assange story goes, but I hope none of us trusts in the absolutism of the movies when it comes to history. But who cares if Julian Assange himself has already criticized the film, for whatever reason? This is a fun, enthralling movie that has quickly tapped into the minefield of 21st century geopolitics. The world of The Fifth Estate is overwhelmingly immediate: we're left with the feeling that we've just watched two hours of a documentary, even if the film isn't totally accurate. It's a rousing champion of free speech, and a compelling portrait of how even the highest moral missions can be complicated by the egotistical delusions of grandeur of a passionate rebel.