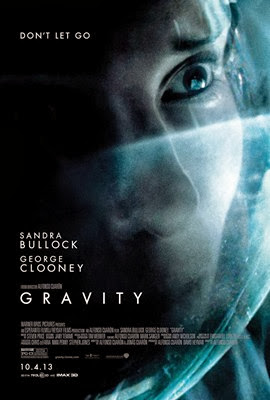 Gravity is a little, big outer-space movie with broad emotions and what may be strangely conflicting aspirations: it attempts to give us a tense, terrifying space movie without a big slimy alien or any other sensationalistic monster. It's just Sandra Bullock and George Clooney and outer space, with technology and the elements serving as the primary antagonists.

The opening scene of Gravity recreates the kind of enjoyably cornball banter (between the astronauts and 'Houston') you hear in those old space movies of the 1950s. That banter sets the tone for a movie that explores the traumatic jump from the (admittedly false) sense of security the astronauts feel to the utter helplessness they experience for the rest of the film. If nothing else, you can rest assured that at barely 90 minutes, Gravity is a mercifully short exercise in constant stress and anxiety.

Most of the time I was internally screaming at Sandra Bullock, who makes a desperate attempt to survive when she becomes detached from the security of the spacecraft during a routine repair mission. At the risk of spoiling a basic plot element, it's kind of like that movie Open Water, except in space. There's also a kind of Blair Witch Project element at work too: she's talking to herself much of the time, sometimes to a vague personage on the radio and sometimes not.

The movie has a big noble theme that it pounds away at, letting its Oscar aspirations show more than just a little: Sandra Bullock's character, who has endured a terrible personal tragedy back on earth, is faced with the choice of survival or surrender. She reckons with her own mortality and the value of truly living in spite of the risks involved. Then of course there's that scene where she barks like a dog, but I'll refrain from describing it in any more detail. I just hope that's the scene they play at Oscar time, if she's nominated.

One of the best things about Gravity is how the director--Alfonso Cuarón--builds a scene with deliberate pacing and allows something truly unsettling to develop. You don't generally see such movies anymore. (That same slow pacing is one of the things I like best about Alien.) The music (by Steven Price) casts a dreadful, ominous pall over the film, and the visuals overpower you as they're meant to do: you're lost in this vacuum with Sandra and George, wondering who is minding the store. It's the ultimate depiction of vulnerability.

Gravity is, in the end, about a kind of rebirth after being knocked down on a grand scale. It's the kind of obvious and easy lesson that most ambitious movies are reduced to in order to get a wide release from studios. Some will call this profound, and in a way, I suppose it is. Perhaps movies are trying to come out of their cynical phase, finally. Maybe I should be more receptive to this message. And yet, I can't help feeling that this is just Sandra Bullock's version of Robinson Crusoe (or Cast Away).

The admittedly spectacular visuals do give the film a sense of spellbinding grandeur (although seeing it in 3-D didn't seem that important to me), and Gravity is a successful movie in its own way. But it leaves you feeling excruciatingly tense. For me, it was often a matter of endurance rather than enjoyment. Clooney gives the film its only respite: his character is laid-back, philosophical in a very easy way, and clearly there to play off Bullock's tense, beaten-down tragic figure. The actors are both good. Written by the director and his son, Jonás Cuarón. ★★½
by Jacob Lusk @ pannedreview
Email ThisBlogThis!Share to TwitterShare to FacebookShare to Pinterest
Tags 2013, Alfonso Cuarón, George Clooney, Sandra Bullock