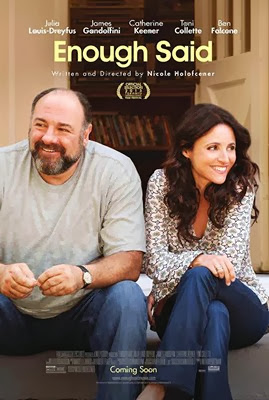 Writer-director Nicole Holofcener has a knack for creating vivid characters whose worlds feel bigger than the movie we're watching. In Enough Said, which is a finely crafted romantic comedy, the romance isn't the only thing going on in the movie. Holofcener wants us to see the myriad relationships of her characters, as well as the many problems, most of which are not clearly resolved, that exist in them.

As Eva, a masseuse whose daughter is about to go off to college, Julia Louis Dreyfus is wonderful. When I saw she was playing the lead in this movie, I thought: Why isn't she in more movies? I've always adored her performances in shows like Seinfeld, Arrested Development and Veep. She's great in Enough Said. Dreyfus has always been able to make use of the full range of her acting abilities, even in sitcoms, but here she's not obliged to be funny all the time. We get to see the vulnerable side to her.

And as her unexpected love interest, Albert, James Gandolfini has the coolness of a Robert De Niro mixed with his own brand of laid-back comedy. Albert's in the same boat as Eva, unhappily counting the days til his daughter moves to New York to study interior design. Their similar circumstances of course contribute to their romance, but (SPOILER), things are complicated by Eva's realization that her latest client, a poet named Marianne, played by the wonderful Catherine Keener, is Albert's ex-wife. And she hasn't exactly been silent about her negative opinion of him.

The writing in Enough Said is clever but wouldn't have worked with just anyone. It's remarkable how much the actors are able to do with it. Holofcener's is the kind of conversational dialogue that can either sound brilliant or puzzling, depending on how it's said. This cast--which also includes the wonderful Toni Collette (as Eva's best friend), and Ben Falcone--knows how to make the comedy effortlessly funny and natural.

As with all of Holofcener's films, the serious grows out of the funny in an organic way. You feel like you're watching something of real life, which is alternately refreshing and uncomfortable. Enough Said has its moments of "eww...is this really happening" cringe-worthiness. But I say this mostly as a compliment to Nicole Holofcener, who is perhaps the best writer of realistic comedy-dramas we have right now. She's an actor's writer (and director), always giving rich material to her performers.