One Is A Lonely Number 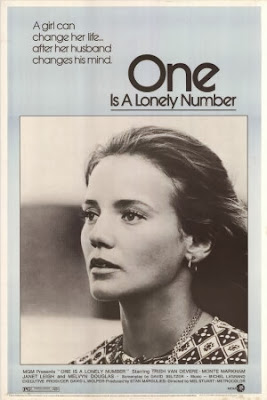 If The Mary Tyler Moore Show had been adapted into a dramatic film, One Is A Lonely Number (1972) is what it might have turned into. It opens with a man walking out on his wife of four years with virtually no reason given, and then follows her journey into self-reliance and acceptance. Her name is Amy, and she's never had to live without a man. She fights off the grubby advances of a sleazy employment agent, gets a job as a lifeguard, befriends a four-time divorcee (Janet Leigh) who's now the head of a club for divorced women who want to get even with their ex-husbands, and forges a sort of father-daughter relationship with an elderly produce man (Melvyn Douglas).

This film is a good example of the many episodic, slightly whimsical dramas to come out of the early 1970s. The director, Mel Stuart (best known for helming Willy Wonka and the Chocolate Factory) manages to keep Amy from being too pathetic, but she has her moments, especially when she breaks down at a production of Shakespeare, crying on the shoulder of the wise old grocer who tells her to "cry until she's finished crying and then learn to live again." It's a noble, obvious women's picture, bolstered by Amy's eventual pluckiness. And the moral of the story isn't something completely silly like, "just wait and you'll find the right man." (When the "right man" does come along--a suave art aficionado played by Monte Markham--he turns out to be married.) Instead, Amy learns to forge a life for herself, and we're left with a cliched but encouraging image of her diving into a swimming pool, frozen in the air so she resembles a bird finally taking flight.

One Is A Lonely Number is certainly dated, but that's part of its charm. It has an enjoyable time-capsule quality to it, and it's refreshing that the film never pretends to be anything other than the story of a woman learning to live on her own. If you can accept the movie on those terms, you'll likely enjoy it.

As for the lead actress, Trish Van Devere, this was her star vehicle. Van Devere's film career was mostly eclipsed by her more famous husband, George C. Scott (with whom she starred opposite many times). But here she's quite good, though miscast. Trish Van Devere almost always is miscast. She's a capable actress who has the makings of an ice queen or a sexy New England boarding school headmistress. But it's hard to believe she could ever be from San Francisco (where this movie is set). (Indeed, Van Devere hails from New Jersey, and she exudes that proper, almost English dignity that makes her always appear to be acting. You can hardly picture Van Devere allowing a man to treat her so badly in real life.) But when she's smiling and cutting up her acting loosens up.

It doesn't help that the dialogue (the script is by David Seltzer from a Rebecca Morris story) feels stilted and stagey, too much like writing. But, as it is, I enjoyed One Is A Lonely Number. (It comes on Turner Classic Movies every once in a while. Since it's never been available on DVD, this is the only way to see it currently.) With Jane Elliot. 97 min. ★★★
by Jacob Lusk @ pannedreview
Email ThisBlogThis!Share to TwitterShare to FacebookShare to Pinterest
Tags 1972, Jane Elliott, Janet Leigh, Mel Stuart, Melvyn Douglas, Monte Markham, Trish Van Devere