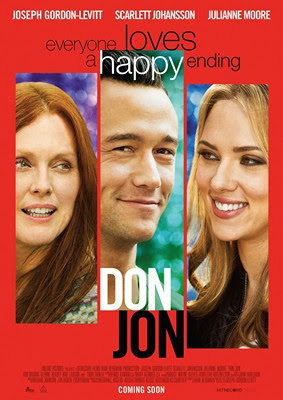 There's something very unique about the character of Don Jon, and something very typical at the same time. I think he represents the current young American male: aggressively macho, high on his own sent, and too distracted and too hooked--whatever the drug of choice--to know how much he desperately wants real human interaction. The scenes of Jon at confession--being assigned a certain number of Hail Marys and Lord's Prayers depending on the number of times he's given into temptation--manage to be both hilariously and heartbreakingly believable.

It's hard to remember the last time an actor has so lost himself inside a character like this. Joseph Gordon-Levitt becomes the ultimate Guido (he also wrote and directed the film, and with a refreshing amount of imagination). It's almost miraculous that you could feel sympathy for him, since he resembles those idiots from the Jersey Shore, but you do. You really do. Gordon-Levitt has fashioned quite an impressive "romantic comedy," especially because it so honestly hits at some of the nerves being ignored almost everywhere else. With Tony Danza, Glenne Headley, Brie Larson, Rob Brown, and Jeremy Luke. Anne Hathaway and Channing Tatum have cameos as the actors in the romantic comedy that Jon and Barbara watch. ★★★
by Jacob Lusk @ pannedreview
Email ThisBlogThis!Share to TwitterShare to FacebookShare to Pinterest
Tags 2013, Anne Hathaway, Brie Larson, Channing Tatum, Glenne Headley, Joseph Gordon Levitt, Julianne Moore, Scarlett Johansson, Tony Danza