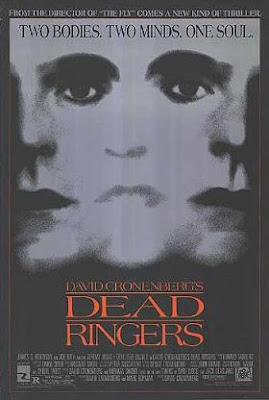 Jeremy Irons' performance as twin doctors Beverly and Elliott is certainly the best thing about Dead Ringers (1988), a sordid psychological melodrama from David Cronenberg about the ambiguous boundaries of the self and the shared experience of twins whose relationship is more than a little unusual and decidedly creepy. Beverly and Elliott were interested in bodies as children, and as men they've become a pair of imminent gynecologists who have their own practice. All the trouble begins--or shall we say is exposed--when Beverly falls in love with a patient, a flaky actress (Genevieve Bujold) who at first seems like the unstable one in the relationship. But her presence exposes the strange hold the brothers have over each other, and from there Dead Ringers just gets stranger and stranger.

Twins have always been an irresistible topic of interest for directors of the macabre. They fascinated De Palma in his kooky horror film Sisters, and Hitchcock played around with them some, or at least with the idea of the Double (particularly in Vertigo). Where Hitchcock tended to explore the Double on a Freudian level and De Palma for the mere shock value, Cronenberg goes for a more internalized approach: he wants to understand his own fascination with the kind of splintered identities that horror movie twins always occupy. But he doesn't move this worn out genre staple in any new directions. He merely opens them up for a kind of cinematic dissection.

To a degree, the film is successful in its morbid quest. Cronenberg is nothing if not consistent. But it's a depressing experience, from the taciturn actors to the drab yuppie-ish set design to the absolutely humorless script. There's nothing remotely enjoyable about it, unless that clinical Cronenberg look and feel is your idea of a good time. With Heidi von Palleske, Barbara Gordon, Shirley Douglas, and Stephen Lack. 115 min. ★★
by Jacob Lusk @ pannedreview
Email ThisBlogThis!Share to TwitterShare to FacebookShare to Pinterest
Tags 1988, David Cronenberg, Genevieve Bujold, Jeremy Irons