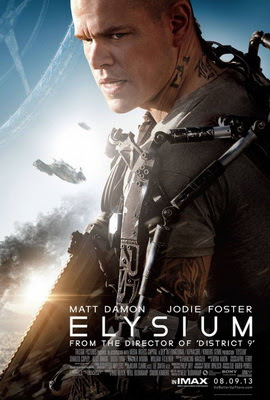 A real stinker from the writer-director of District 9, Neill Blomkamp. In that film, aliens and humans co-habitated in a dystopian futuristic Earth. In Elysium, the world is just as dystopian and just as cruddy: decimated (presumably) by nuclear war and ravaged by disease and overpopulation (as contradictory as that may sound), the humans co-habitate with computers, which in some cases have become a part of their own bodies. The wealthy have long since gotten the hell off of Earth, retreating to a man-made outer-space habitat called Elysium (borrowing its name from Greek mythology, the heaven for the people who had connections), where they sip cocktails and swim in their own private pools, and are instantly healed of any ailment by sliding into a glass scanning device called a Medbank. (The film relies on some clumsy captions to set up this story rather than tell it to us visually.)

The people of earth are drab and haggard looking, while the residents of Elysium look like Harvard Business School alums at a business casual brunch. Jodie Foster plays the defense secretary--for our purposes she's sort of the head of Elysium--adorned in smart pantsuits and dresses, and she's like the corrupt politician who's slightly more corrupt than everyone else around her. Foster employs a semi-British accent to sound evil in a sophisticated, calm way. If she's not careful, she may become our next Katharine Hepburn: overpraised and overloaded with awards just for showing up in a film. Here she does lend the film a kind of sickly charm, but her coy vindictiveness is lost in a movie that is ever so carefully contrived.

You can feel the plot connections sliding into place before they happen: every relationship, every bad line that's infused with a kind of self-conscious would-be lyricism. Matt Damon, who plays Max, the main character, keeps having flashbacks of his friendship with Frey (Alice Braga), a friendship that apparently dissolved over time but that is semi-rekindled as he attempts his journey to Elysium. He's been exposed to an extreme--and soon-to-be-fatal--level of radiation at work, so his only chance of survival is one of Elysium's coveted Medbanks. But Frey, now a nurse, wants him to take her young daughter with him because she's dying of leukemia.

The whole time I was criticizing the movie because its protagonist seemed bent on such a self-centered mission, Neill Blomkamp was waiting with a dying kid to make it all right: she's there to make his mission selfless and human and poignant. When our hero is facing possible death, he tells her mother, "tell your daughter I liked her hippo story." Earlier, when the little girl told told him said story, he wasn't interested in talking to her. He couldn't save her, and he didn't want to get involved. But you see, Blomkamp put that scene in there for later use: he could rely on it to pull at our heart strings in the eleventh hour.

Those of you who like grim dystopian stories will probably find Elysium to be your cup of tea. It certainly grabs at a lot of ideas, such as the coming computer takeover, and the possibility that we might make our world unlivable. But there's very little in Elysium to give you hope or pride in our kind. They're either rogue criminals or bland preppies hoarding all the health cards. Elysium is a sci-fi thriller for those who think this is the only kind of story worth telling. And when it comes to a sense of story, why bother with anything original? The usual will do. This is the kind of pre-packaged movie that makes you feel the studio system is either full of contempt for its audience or full of apathy. Possibly it's both.