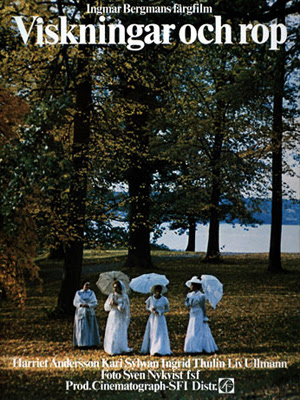 Cries and Whispers (1972) is like a Jane Austen novel with postpartum depression. It's from the great Ingmar Bergman, and tells the story of three sisters: Agnes (Harriet Andersson), Maria (Liv Ullmann) and Karin (Ingrid Thulin), living together in 19th-century Sweden. Agnes is dying of cancer, and her sisters are unable to comfort her. All three are plagued with painful memories of their childhood and later experiences of discontent. It's the kind of feel-bad movie you would need to balance out the sunny disposition of a Pride and Prejudice type-film. As is to be expected, this is the kind of film that relies more on silence than on witty banter (it's Swedish, not British), and watching it is kind of like sitting in a hospital waiting room, if the experience were filmed with fine European craftsmanship and lavish, garishly red set designs.

After Karin tells Maria she has hated her all her life and that Maria's attempt to reach out to her is insincere, she lets out a gut-wrenching groan from the very bowels of her soul, releasing years of calcified hate and contempt. Suddenly she begs Maria's forgiveness, and there's a kind of redemptive rekindling of a friendship that never was between the sisters.

Cries and Whispers captures listless family heartbreak at its most unattainable: the subtle torture of years of quiet desperation and their numbing affect on the soul. If that makes you warm and fuzzy, watch this movie. Written and directed by Bergman. With Kari Sylwan as Anna, the sisters' dedicated housekeeper, who has her own quiet miseries, and Erland Josephson, Anders Ek, and Henning Moritzen. 91 min. ★½
by Jacob Lusk @ pannedreview
Email ThisBlogThis!Share to TwitterShare to FacebookShare to Pinterest
Tags 1972, Harriet Andersson, Ingmar Bergman, Ingrid Thulin, Liv Ullmann