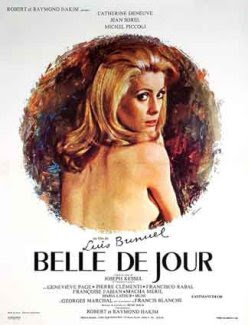 The lovely Catherine Deneuve plays a Parisian newlywed who becomes a high-end prostitute in Luis Buñuel's Belle de Jour (1967), which captures the convoluted mixture of guilt and excitement in acts of transgression. For a while, Belle de Jour is a sympathetic character: her doting husband (played by Jean Sorel) is certainly nothing to complain about. His worst problem is that he's bland; but he's handsome and loving and a good provider, and reacts good-naturedly when his wife turns him down in the bedroom night after night. No, Belle doesn't turn to prostitution out of an unhappy marriage, even though she feels that she is incapable of making love to her husband. She's a little bored, a little scared of the permanence of marriage, and, possibly, is unable to be with men who respect her. And that curious mixture of indignity and taboo adds to the allure, even though it takes Belle a while to work up to the demands of her clients. (There's also a hint that she may have been abused as a child; this would give credence to the idea that she can't allow herself to be treated right.)

Despite the subject matter, Buñuel's film is tastefully done, never fetishistic or exploitative. This film's aim is not to titillate the audience in a perverse fashion; it's instead interested in exposing the uncertainties people grapple with and the tremendous amount of fear that drives very ordinary people to decidedly outre patterns of behavior. But it's rather difficult to want to throw a pity party for Belle, because she gets entangled with a client who's obsessed with her, and he eventually finds out about her husband, whom he sees as an obstacle. We can only suspect that this man will harm Mr. Belle de Jour, such an affable boy scout.

You really start to appreciate the normality of blandness in Belle de Jour, because Buñuel offers the fantasy of doing something outlandish and shows us both the excitement and the ugliness of it. It makes the not-so-hip normal life seem rather more appealing, and particularly pathetic when the not-so-hip normal guy is cast down by a cruel twist of fate.

With Michel Piccoli; Genevieve Page, who gives a wonderfully sympathetic and vulnerable but assured performance as Madame Anais, the lady who runs the brothel; Pierre Clementi as Marcel, the man who becomes obsessed with Belle de Jour; and Francoise Fabian and Maria Latour as two other prostitutes. Written by the director, Jean-Claude Carriere, and Joseph Kessel, on whose 1928 novel the film is based. 100 min. ★★½
by Jacob Lusk @ pannedreview
Email ThisBlogThis!Share to TwitterShare to FacebookShare to Pinterest
Tags 1967, Catherine Deneuve, Jean Sorel, Luis Buñuel