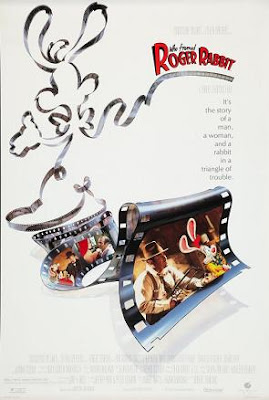 For years, my adult self looked back on Who Framed Roger Rabbit (1988) with fondness. It was a movie I watched fairly regularly, and it shared a VHS space with George Romero's Day of the Dead. (In those days, my parents taped movies off television, and we had hundreds of them, three to a video-cassette tape.) Well, having just re-watched Roger Rabbit for the first time in probably eight or nine years, I must report that I no longer feel the same affection for this movie. This time, I was struck by the fact that it's noisy and chaotic and not as entertaining as it used to be.

The director is Robert Zemeckis (Back to the Future), and Steven Spielberg co-executive produced the film, which was made by his production company, Amblin. And yes, it's some kind of an adult tribute to cartoons, from the old to the new, from MGM to Warner Bros. to Disney. The effects of intermingling live action and animation were, of course, something else a quarter-century ago. Today they're a bit dated, but the film is still watchable in that sense.

The plot is taken out of some 1940s L.A. noir. A washed-up, boozing private eye named Eddie Valiant (Bob Hoskins) is hired by a studio executive to take some lewd photos of a cartoon named Jessica Rabbit (uncredited voice of Kathleen Turner, who was the Lauren Bacall of the 80s) in flagrante delicto with Marvin Acme (Stubby Kaye), the owner of Toontown, which is exactly what it sounds like. When Jessica's husband the daffy Roger Rabbit sees them, he becomes infuriated. Next thing you know, Marvin Acme is bumped off, and Roger of course becomes the prime suspect. The obvious culprit isn't Roger, though. It's the ominous and clearly malicious Judge Doom (Christopher Lloyd), who has big plans for Los Angeles as it finishes out the 1940s.

Who Framed Roger Rabbit is designed to keep the kiddos interested. And with that, the filmmakers lose no opportunity to keep things flying at you. There's barely a moment to catch your breath. When the film slows down and allows Bob Hoskins to actually dominate the screen, it becomes more watchable. He's a marvelous actor who commands the screen when he's allowed to. He looks like Ed Asner: a lovable bear of a man, whose British accent occasionally slips out, generally when he's shouting.

Hoskins is paired off with Joanna Cassidy, who plays the no-nonsense bartender Dolores, his girlfriend who's too realistic to be bowled over with ideas of romance or being swept off her feet by her has-been of a beau. Cassidy doesn't have much room for character growth, but she's able to convey a lot just by the way she stands with her hands on her hips, or in the way she pronounces Eddie a failure with a look or a simple gesture. These are the kinds of actors you need in a film like this, where no one is particularly interested in the acting. All the eye candy is on display to titillate us, so why would we ever care about something so drab as performances? They make it palatable.

As the voice of Roger Rabbit, Charles Fleischer doesn't fail to inject a certain madcap genius into his vocal performance. But Roger grates on the nerves: he's the annoying sidekick who keeps ruining everything for the hero, and the fact that he's constantly trying to steal the show and be cute didn't endear him to me this time around.

There are lots of familiar voices popping up, as this isn't the kind of movie that's content to let the humor or the excitement build of its own momentum. It's all shoved into our faces at break force speed, with director Zemeckis seemingly screaming, "SEE? ISN'T THIS GREAT STUFF?!" You'll find: Betty Boop (Mae Questel), Bugs Bunny and various other cartoon characters performed by Mel Blanc. With Lou Hirsch as Baby Herman, David Lander as the Judge's right-hand-weasel, Alan Tilvernas R.K. Maroon, and Richard LeParmentier. Amy Irving sings "Why Don't You Do Right" as Jessica Rabbit. Written by Jeffrey Price and Peter S. Seaman. 104 min. ★★½
by Jacob Lusk @ pannedreview
Email ThisBlogThis!Share to TwitterShare to FacebookShare to Pinterest
Tags 1988, Amy Irving, Bob Hoskins, Christopher Lloyd, Joanna Cassidy, Kathleen Turner, Robert Zemeckis