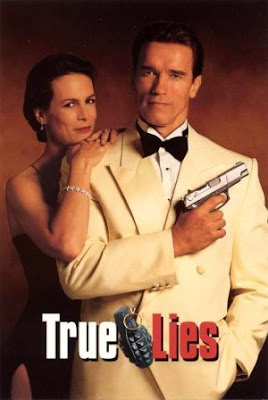 I really don't like giving James Cameron any credit, and I certainly wouldn't do it if I didn't have to. But True Lies (1994) is a good example of how to do action movies right. It's completely mindless, but, except for a tacked on second ending that feels like overkill, it's a fun movie that draws you into its chaotic, mindless action sequences with a fairly fresh take on the whole spies vs. terrorists plot. Arnold Schwarzenegger plays Harry Tasker, who works for a U.S. counter-terrorism operation. His mousy wife Helen (Jamie Lee Curtis), thinks he's a boring computer salesman, and because the excitement in their marriage is long gone, she's become involved with a con artist (Bill Paxton) whom she thinks is a spy himself.

True Lies enabled Jamie Lee Curtis to show another side of herself: she performs a striptease act in front of a man (her husband, although his face is concealed in darkness so she doesn't know it's him). What's impressive is how good she is at it, and how funny it is when she loses her balance but picks herself right back up. Curtis has always had spunk, and while this scene is a little creepy (especially if it's supposed to be some kind of career marker for her), she also gets to be a heroine in this movie. And her naturally funny personality comes through beautifully too.

What works in True Lies are the comic performances of Curtis and Tom Arnold, who plays Harry's loud-mouthed right-hand-man Mike. (He has all the best lines.) And even Arnold is enjoyable here. The movie doesn't take itself too seriously, so why should he. He's at ease, playing a guy he's played seemingly a hundred times. When he asks Tia Carrere to Tango--and then later when he Tangos with his wife--he's totally unconcerned with all the serious things going on in the movie, a signal to us that we're at least in front of a film that wants to show us a good time. Who can ask for anything more?