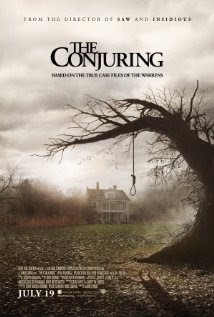 "There's a case in Long Island they want us to check out," says Ed Warren (Patrick Wilson) to his wife, Lorraine (Vera Farmiga). Those in the know will recognize this as a reference to the horrific Amityville case. It's 1971, and the Warrens are paranormal investigators and demonologists who have spent a harrowing few weeks trying to exorcise the infested Rhode Island house of the Perron family (headed by Ron Livingston and Lili Taylor, the parents of five girls.) But there's a little historical inaccuracy here: As far as I know, the supposed hauntings of the DeFeo house in Amityville did not occur until 1977, after the real-life horror that befell the DeFeo family in 1974 when 24-year-old Ronald DeFeo shot and killed his parents and four siblings.

The Conjuring suggests all the horrible tragedies that we still talk about in hushed tones around campfires, such as the Amityville case. (Well, no one seems to remember the true case, just the widely disputed Jay Anson book about the alleged hauntings that occurred afterward.) This is Saw director James Wan's ode to the haunted house and demon possession shockers he grew up on. There's a little Exorcist, a little Poltergeist, and a little Amityville, and some unimaginative allusions to the Salem Witch Trials.

The Conjuring has that chilling effect that many less capable scare movies grasp for fruitlessly. It's not unlike reading that great Henry James hair-raiser The Turn of the Screw: it fills you with dread at the very beginning, and for the next two hours the dread only increases. Wan is going for the cumulative effect of subtle creepy things: creaking doors, hands of an unknown specter clapping in the dark cellar, pictures crashing to the ground with cacophonous force, secret passages boarded up long ago but newly discovered by our unwitting protagonists, creepy, pale ghost-children breezing through hallways and reflected fleetingly in window-glass, clocks stopping in unison, all the usual tropes that we've seen a hundred times. And yes, some of them are still creepy, but their familiarity hampers the film.

One of the film's assets is that the characters generally avoid making stupid mistakes. I've grown impatient with horror movies that still resort to the "stupid character" cop-out. I mean, after fifty years of modern horror films, I think we've moved past that point. And yet, when I let down my guard and actually watch a contemporary horror film, I'm almost always disappointed to see that old device still hard at work, giving its director and writers carte blanche to unleash a barrage of horrifying consequences for their own characters' mutton-headed decision-making skills. Thank you, thank you, to the writers of The Conjuring (Chad and Carey Hayes) for at least respecting our intelligence in that arena.

This is the kind of scare picture that will make you want to bone up on your paranormal pop culture history. I started imagining myself going on a dastardly Amazon shopping spree, buying books on ghosts and other phenomena of the middle twentieth century. What is it about that period that seems to be of particular interest? I think it may be because the 1940s-1970s symbolized a time when the all-American family was at its peak. Even when that tradition was being challenged by hippies and war protestors and sexual revolutions and the like, it existed as a constant, a kind of immovable bastion or bogey, depending on your point-of-view.

The American family is a pretty easy target in a horror movie, and it's always disturbing to see it truly terrorized (as in Wes Craven's 1977 exploitation film The Hills Have Eyes, which was particularly frightening because it didn't obey the unwritten rules about who is supposed to survive a horror movie). You feel for the Perron family, and there's a connection between them and the Warrens that makes The Conjuring more human than much of its ilk.

But I'm not particularly fond of the dread I felt watching this movie. And while The Conjuring is certainly effective in its own way, it left me once again longing for a "fun" horror movie. Do they still make those anymore?