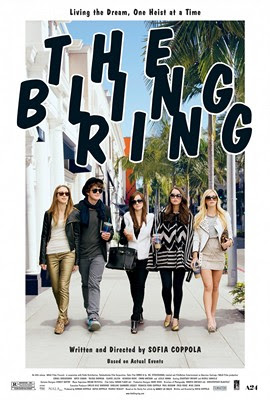 In The Bling Ring, which is about a group of bored, privileged adolescents who get their kicks sneaking into the homes of celebrities (such as Paris Hilton, Lindsay Lohan, and Orlando Bloom) and stealing their stuff, there's a kind of religious reverence for possessions and fame. The film, which is apparently based on real events, represents perhaps the most blatant product of the separate yet inseparable cults of youth and celebrity that permeate popular culture and capture the imaginations of those of us who aren't rich and famous. We're the schlubs on the outside looking in, and the impressionable teenagers are the easiest targets and the most willing participants, the most devout cult members, it would seem.

When they sneak into Paris Hilton's house, they revel in the excess of her closet, which has smaller closets and hidden compartments: walls and walls of shoes, drawers full of necklaces and bracelets, ridiculous outfits; she has a night club "room," and there are pillows with her face embroidered onto them placed on the seats of her chairs. This is all very impressive to the Bling Ring kids, who treat it like make-believe: they're the princesses trying out mother's big dresses and putting on a show. But the thrill of sneaking and stealing, the allure of never knowing exactly what they'll find, and the money they're able to make hocking some of their contraband (much of which funds a festering cocaine addiction), quickly turns their nightly outing into a kind of thrillseeking high in and of itself, one which spirals out of control in short order.

Director Sofia Coppola isn't interested in having us condemn the actions of the teenagers without condemning ourselves. She's more interested, I think, in letting the consequences play out, and capturing the reactions of the kids, most of which are pretty dismal. There's one, the one boy in the group (played by Israel Broussard), who was obviously looking for acceptance, who seems to regret his decisions. The other members don't though. In getting caught--and exposed by the media--they're finally able to achieve what they wanted all along: celebrity. The consequences are worth it for them.

The Bling Ring rather brilliantly implicates the audience in the crimes of its main characters. We who comment on the trashy magazines at the grocery store, who read all the gossip columns online, who treat our Facebook and Twitter accounts as venues for shameless bouts of narcissism, are expressing in a much more concentrated and acceptable way the kind of behavior these kids grow into. It was very easy for me to condemn them. I even rooted for the police when the inane, vapid kids were read their Miranda rights. (Let's remember--better yet, let's forget--that this ultimately pegged me as rooting for Paris Hilton.)

The Bling Ring, which is always sort of casual and mock-hip, manages to be a stinging indictment of American materialism without ever pointing a finger. (Although it's not very subtle when Leslie Mann, playing the completely bonkers mother of one of the girls, who touts the merits of The Secret and tries to pass it along to her daughters, who constantly deride her, is on screen. She becomes the hip modern mom with stunning ease.) With Katie Chang, Emma Watson, Claire Julien, and Taissa Farmiga. Written by the director; based on the article "The Suspects Wore Louboutins," by Nancy Jo Sales. 90 min. ★★★
by Jacob Lusk @ pannedreview
Email ThisBlogThis!Share to TwitterShare to FacebookShare to Pinterest
Tags 2013, Emma Watson, Israel Broussard, Leslie Mann, Sofia Coppola