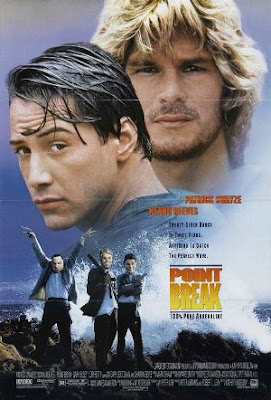 In Point Break (1991), directed by Kathryn Bigelow (The Hurt Locker, Zero Dark Thirty), Keanu Reeves, who is incapable of not sounding like a surfer, plays a fresh-faced young FBI agent who's forced to go undercover as a surfer, even though it's like totally out of his comfort zone. That premise is about as believable as his performance. Keanu squares off with Patrick Swayze, the charismatic, Manson-lite leader of a foursome of surfing buddies who spend their free time robbing banks. They're known to the FBI only as the Ex-Presidents, because when they rob banks they wear Halloween masks that bear the resemblances of Reagan, Carter, Nixon, and LBJ.

It is my understanding that Point Break is something of an iconic film for action movie buffs. Who can forget the scene in Hot Fuzz when Nick Frost--imitating Keanu--can't shoot his enemy, and instead points his gun in the air and fires repeatedly while shouting, "NOOOOO!"? And yet, Point Break isn't particularly interesting or thrilling (except for a few scenes, including a misfired shootout at a meth house that is tensely exciting). It manages to be both a gritty cops-and-robbers action flick and a meditation on surfing, trying to capture the philosophical majesty of catching a wave. But it never quite gels.

The film hinges on Swayze's pitch: he's fighting the system by living life his own way, riding the waves rather than trying to climb a corporate ladder somewhere. I appreciated his disdain for that whole corporate system lifestyle. I'm not a big fan of it either. And I also appreciated that Patrick Swayze doesn't ever "try" too hard. He just does his thing, and his performance feels easy and natural compared to poor Keanu, who, try as he might, can't seem to conjure up any power behind his screams and shouts. He's incredibly lucky that he's good-looking and likable. And, as I wrote about in my Dracula review, he's got enough capable actors around him to pick up the slack.

Gary Busey, playing Keanu's seasoned partner, seems to have played this part before. His role isn't particularly interesting, but he manages to breathe some crusty, tough-as-nails life into it. And Lori Petty, as the love interest, has a certain vulnerability to her. She's been hurt but she's wizened up and she's a fighter. Kathryn Bigelow is a capable director--Point Break is well-made for what it is--but she fails to lift the movie out of its badness. It's a collection of ideas patched together from other action films: a slick, carefully put together piece of product. But she finds little ways to stir up some embers when she can. There's a certain haunting quality to the film that you don't generally get in an action piece, and it reminded me of her vampire movie, Near Dark, which was equally haunting. And there's that lingering theme of obsession which seems to be present in most of her films: Keanu becomes obsessed with tracking his bank-robbing foe, and Swayze is obsessed with catching the perfect wave. (There's even a little something-something going on between them, if you ask me.)