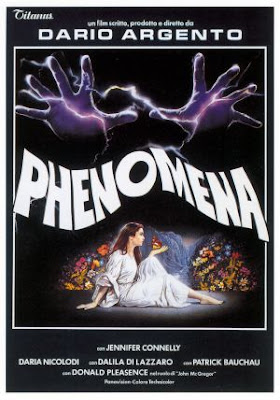 Probably the most outre of Italian horror director Dario Argento's body of work. Phenomena (aka Creepers) (1985) has just about everything one could ask for in a schlocky horror movie: a girl (Jennifer Connelly) who has some kind of psychic connection with bugs, a serial killer, a razor blade-wielding monkey, and a kid with a deformed face. Argento revives the old boarding school device (Connelly travels from America to study at a Swiss girls' school where most of the other girls are snooty little shrews who pick on her), but the director remains true to himself by once again avoiding (for the most part) the demands of logic or plot.

While Phenomena is less violent than some of Argento's earlier films (Deep Red comes to mind), it certainly ranks high on the "ick" factor. And after a slow start, the dumb aspects of this rather standard thriller start to actually have an effect on you. The ending--as contrived as it is--is genuinely spooky, with Daria Nicolodi trapping the heroine in a vast Swiss estate with some pretty amazing electric-powered shutters and a pit in the cellar full of skeletons and maggots. (Fun!)

Donald Pleasence appears as a kind-hearted old entomologist who studies bugs on murder victims to determine their time of death. He befriends Connelly and becomes a kind of grandfatherly influence on her. Dalila Di Lazzaro plays the suspicious, bossy headmistress of the school, Patrick Bauchau plays the ineffective inspector, and Federica Mastroianni plays Connelly's roommate. One of the film's greatest weaknesses is that it doesn't establish the school or its students very well. The girls only figure into the movie when Argento needs to show another victim being stalked. Also, I am perplexed by Argento's obsession with pushing his victims through glass. He did it in Deep Red and Suspiria also. Granted, it never ceases to be horrifying, and Argento will never be accused of abandoning previously used techniques. But haven't they suffered enough by then? 110 min. ★★½
by Jacob Lusk @ pannedreview
Email ThisBlogThis!Share to TwitterShare to FacebookShare to Pinterest
Tags 1985, Dario Argento, Donald Pleasence, Jennifer Connelly