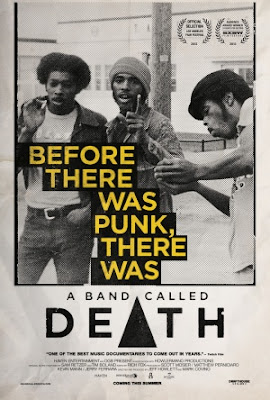 A Band Called Death is a mesmerizing documentary about an obscure Detroit punk rock band called Death. Comprised of three brothers--David, Dannis, and Bobby Hackney--Death was born and died in the 1970s, never reaching an audience until years later, when the master recordings were discovered in the attic of the Hackney family's house. The documentary chronicles the band members' life: they were born to a Baptist minister, and their mother and father both encouraged their love of music, filling the house with it from the beginning.

When the boys were finally able to purchase some good instruments and an amp, they began spending their afternoons jamming in an upstairs bedroom of their Detroit home. Influenced by the likes of The Beatles, The Who, and Jimi Hendrix, the Hackney brothers resisted the motown mold that seemed to be the only musical outlet for black musicians at the time, and while there was a certain element of funk in their songs (the first band name they came up with was Rock Funk Fire Express), they captured a kind of dizzyingly energetic, supercharged punk sound that was truly novel. Nobody really knew what punk was yet. (This is 1973, pre-Ramones.) And nobody expected it to come from these three boys from Detroit.

A Band Called Death manages to capture the bittersweet, tragic yet fulfilling elements of this band's history of obscurity. Perhaps the most fitting--and enthralling--aspect of this story is that the sons of one of the Hackney boys have started their own band--called Rough Francis, a tribute in itself to their uncle David--and are touring the country, incorporating their musical roots into their own work. When we see this torch-passing moment unfold at a concert, with Dannis Hackley and his wife proudly watching their three sons performing songs written by him and his brothers, we feel blown away by the momentousness of the act.

And the story of David Hackney in particular--he was the group leader, the one who wrote many of the lyrics and who came up with the band's admittedly provocative name--is like something out of rock 'n' roll myth. The man, who died in 2000, carries such weight with his brothers and everyone else who knew him, and you sense that in this movie. It's a fine tribute and a particularly satisfying chapter of music history that I certainly didn't even know existed until now. And yes, you can now access Death's music on the internet. They seem to be finally getting their due, and this turned out to be a surprisingly engaging, funny, touching, fun movie. Directed by Mark Christopher Covino and Jeff Howlett. Featuring the Hackney brothers, Alice Cooper, Henry Rollins, and Elijah Wood (!). ★★★
by Jacob Lusk @ pannedreview
Email ThisBlogThis!Share to TwitterShare to FacebookShare to Pinterest
Tags 2013