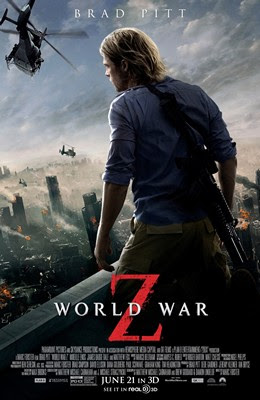 In World War Z, the zombies twitch and jerk like junkies, and they go after humans like they're walking meth containers. This is a zombie film for those who felt 28 Days Later was too microscopic. Instead of staying in one general geographic location, World War Z takes us on a North By Northwest-ish tour of various countries as the hero of the film (Brad Pitt) tries to figure out the root cause of the zombie apocalypse, which is quickly overtaking the entire world.

The current apocalypse-chic has produced some rather odd but familiar entertainment: there's a new show about a small town that becomes encased by an invisible dome. (It's from a book by Stephen King and is being executive produced by Steven Spielberg.) Man of Steel had an apocalyptic ring to it: Krypton was compromised (and obliterated) because its inhabitants exploited their own planet, and Earth is threatened with annihilation by the calculating General Zod. The latest in this long string of end-of-the-world science fictions is World War Z, based on the novel by Max Brooks. It was adapted by Matthew Michael Carnahan, Drew Goddard, and Damon Lindelof, and between the three of them are the scripts of half-a-dozen action-science fiction-horror movies of the last few years (including Prometheus, Star Trek Into Darkness and The Cabin in the Woods.)

While World War Z puts us back in the territory of Danny Boyle's film 28 Days Later, it's more deeply rooted in the stories of H.G. Wells and the like. The film seeks to locate and understand the cause of the fast-acting bacteria that turns people into zombies: energetic, jerky, violent, fast-moving zombies. The plague spreads across the earth, and eventually an ex-United Nations operations guy (Pitt) is summoned to help a doctor and a team of Navy SEALS investigate what might be the root of the plague, in South Korea. Of course, this is just the first stop of the movie. We're privy to the destruction of New York City in a prelude featuring Pitt with his family, a wife (Mireille Enos) and two daughters. Then after South Korea, we wind up in Jerusalem and then Wales and ultimately Nova Scotia.

There are moments when you cannot tell what's happening. I regret that I am beginning to sound like a broken record when I report to you this common flaw in actiony movies. But it's persistent throughout many of these films. In the scene in NYC, it's virtually impossible to tell what's happening while the family tries to flee the crisis that erupts downtown right in front of their eyes. But when the movie takes a breath, and the human story is allowed to build and thrive, World War Z is an absorbing and suspenseful thriller. And eventually that nasty habit of shaky camera-work becomes less necessary, so that most of the later scenes of suspense and terror aren't as jarring. They're just suspenseful and even a little bit spooky. The film has even a touch of humor at times, and Brad Pitt represents the kind of hero audiences will root for. He's determined and likable.

Overall, World War Z will please genre fans as long as they aren't expecting too much novelty. There are a few annoying plot devices (stupid actions that characters do to bring about a proverbial shit-storm of zombie turmoil on themselves and others), but you forgive them because the movie works much of the time. It pushes all the right buttons, and the last half-hour at the World Health Organization is quite tense and even, dare I say it, fun. Directed by Marc Foster. With James Badge Dale, Matthew Fox, David Morse, Ludi Boeken, Fana Mokoena, Daniella Kertesz, Peter Capaldi, Pierfrancesco Favino, and Ruth Negga. 116 min. ★★★

I really liked this movie! It was my first zombie movie. I actually went into it not knowing that's what it was about, but I loved it anyway! I agree that last part at the WHO was very fun and suspenseful.

This one is a good starter zombie movie for those who aren't sure if that is their thing. It's enough of an adventure and drama film to balance out the zombie stuff. Also, some zombie purists would probably tell you it's not even a real zombie film (same as 28 Days Later).

But NIGHT is the least so, since it's the oldest and it's black-and-white, and you can probably find it on youtube, as it is sadly in the public domain due to a little copyright mishap.

Thanks for reading, Natalie. And I am glad you liked WWZ. I liked it too.