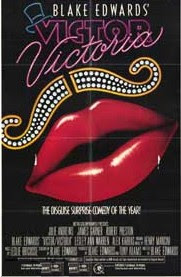 "A woman pretending to be a man pretending to be a woman?" Julie Andrews asks Robert Preston in Victor Victoria (1982), a gender-bending musical comedy--set in Paris in 1934--from director Blake Edwards that desperately wants to be "with it." The trouble is, Julie Andrews is far too wholesome to ever convince as a woman posing as a man-turned-female impersonator. When she auditions for a gig at the beginning of the movie--as a woman, doing opera--she's turned away after being told she's not naughty enough. If ever a movie contained a self-fulfilling prophesy, this is it.

Of course, it has some things going for it: there are laughs, some of them slapstick numbers that may be yet another sign of the director's desperation: in case you're not held by the film's plot and its faux gaudiness, you might be amused by people bashing each other over the head with blunt objects. There is one marvelous number, "Le Jazz Hot," which features Julie's voice well. And there's Robert Preston, her gay assistant who hatches the female impersonator idea in the first place. He's energetic where everyone else seems exhausted.

James Garner plays the love interest, a very masculine night club owner from Chicago who's scoping out the Paris nightclub acts with the hope of finding one that will sell. He falls for Julie during the act, before realizing she's a man (allegedly), and then spends the rest of the film feeling uptight about his masculinity. He's not particularly believable as either a night club owner who attends risque shows or a love interest for Julie Andrews.

There are some preachy values at work in Victor Victoria that make the film rather complacent. After Julie seduces James, she gives him lectures on women's lib and gender roles that feel too self-proud. Are we supposed to reward the movie for being a champion of civil liberties? (Then again, there were quite a few "message" comedies from the late 70s and early 80s that decided at some point to look straight into the camera and preach, and most of them were nominated for Academy Awards.)