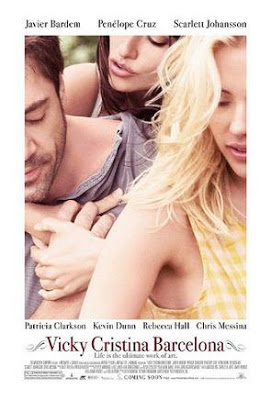 Vicky Christina Barcelona (2008) is flirtatious and enchanting fun about two best friends whose extended stay in Barcelona one summer has unexpected effects on both of them, and all because they meet a charming, suave painter, a sort of modern-day Casanova, played by Javier Bardem, who invites them to spend the weekend with him. Fun-loving and curious Christina (Scarlet Johansson) is intrigued and immediately receptive, while cautious, level-headed (and engaged) Vicky (Rebecca Hall) balks at Bardem's outright proposition.

Of all Woody Allen's recent movies, this one--along with Scoop--is the most entertaining. Allen is currently on a quest to capture all the romantic European cities. With Barcelona, there isn't so much of an expectation--as there was with Paris in Midnight in Paris. This is breezy, undemanding entertainment that is clever and unpredictable enough to feel fresh and playful.

Penelope Cruz plays Bardem's ex-wife, a dramatic, neurotic painter who allegedly tried to kill him during one of their famously intense fights. When she enters the picture, things get even more complicated. Allen presents Barcelona as a kind of drink, and its effects on the two unsuspecting American girls are like the effects of alcohol, intoxicating the senses, making them falter in their once sure-footed plans for the future, and filling them with a new-found appreciation for the unpredictable. With Patricia Clarkson, Chris Messina, and Kevin Dunn. Narrated by Christopher Evan Welch. 97 min. ★★★
by Jacob Lusk @ pannedreview
Email ThisBlogThis!Share to TwitterShare to FacebookShare to Pinterest
Tags 2008, Chris Messina, Patricia Clarkson, Penelope Cruz, Rebecca Hall, Scarlett Johansson, Woody Allen