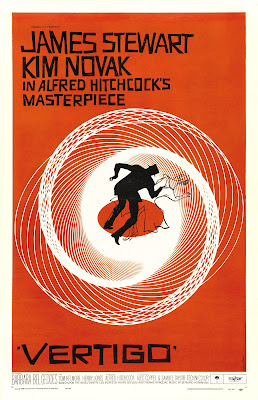 Vertigo (1958) may be Alfred Hitchcock's most beautiful film, but it's also his most overrated. I don't mean to suggest that it's a crummy movie. It is well-made and absorbing to a point, but not the perfect masterpiece that everyone says it is. It's an imperfect gem, lacking the humor that makes some of Hitchcock's best, most entertaining films (such as Strangers on a Train and Rear Window) so good. Vertigo operates like a voyeur's idea of Freudian psychology: a man (James Stewart) becomes obsessed with a beautiful woman (played by Kim Novak) and when she dies, he becomes obsessed with a girl who looks a lot like her, to the point that when he actually develops a relationship with this new girl, he forces her to change her hair and wardrobe to get the look down perfectly. If anyone ever needed a movie to refer to for ways not to treat a girl in a romantic relationship, it's Vertigo.

Set in San Francisco, it's a tale of obsession that feels obsessive. The colors and the sensual music by Bernard Herrmann (a fantastic score, to be sure) are all hypnotic, and the film has some kind of an enchanting spell to it. But it lumbers on and on like an elongated episode of The Twilight Zone in which the befuddled hero, Scotty Ferguson, is the character whom nobody understands: the alienated figure. Scotty is a private detective, but ever since he nearly fell to his death from a very tall building (he was chasing a criminal, and another cop did fall to his death), Scotty has been unable to deal with heights.

Maybe there's something too unsettling for me about Jimmy Stewart playing such an obsessive person. He's downright creepy, and this from Hollywood's favorite "Everyman." Hitchcock should have gotten someone more heelish to play the part, like William Holden or Tony Curtis. Only then he might have lost the sympathy of the audience, because those would have been actors easy enough to dislike--in a "love to hate them" kind of way. They're both handsome and charming in ways Stewart never was, but they didn't conjure up that Americana image the way Stewart did. (Personally, I'm fine with this, but I can see why Stewart got the part.) Ironically, the picture was a failure at the box office initially, so the casting didn't seem to make much of a difference in terms of box office.

Nevertheless, Vertigo is the one the critics love to theorize all over, to the point of redundancy. People see a movie like Vertigo and like to read all kinds of things into it: it's the most personal film by "the Master," they say in hushed tones. Hitchcock's perversely dark pleasures are certainly showcased here, but the sense of humor that marked other films--North By Northwest, The Lady Vanishes, The Trouble With Harry, The Man Who Knew Too Much (1934 version), etc--is missing. It's a deadly serious affair, and it stays with you, haunting you, for days afterward. It's sort of a shame that this is the one people put at the top of the list, because it tends to negate one of the chief qualities people love about a Hitchcock film: his ability to entertain us by showing us a good time. Here we're morbidly curious--fascinated even--in a dirty, disgraceful sort of way. And we become the corrupted voyeurs along with Scotty. But it's not like in Rear Window, where we were part of his team. Instead we're like amateur psychologists, pretending to diagnose him with some kind of Freudian-sounding neurosis. Nevertheless, Vertigo is compelling in its own morose way, like being unable to look away from a traffic accident.