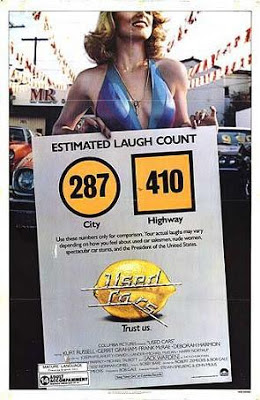 It's a comedy about rival used car dealerships somewhere in the Southwest, run by constantly fighting twin brothers (both played by Jack Warden). Used Cars (1980) has some clever ideas in it, but as a comedy goes, it's lazy. The funny scenes are never particularly focused, and they don't develop the movie. It's episodic and haphazardly conceived, and then there's a race-against-time kind of finale tacked on at the end to try and maneuver the audience to root for the characters--and the movie--when both have just fumbled through the motions for nearly two hours. That's one of the biggest problems for this movie: it has a breezy style that seems contradictory to its ugly production values and its cynical sense of humor. (This is, after all, a comic exhibition of the worst of consumer culture: the junkyard.) I think it's an intelligent movie, but one that hardly deserves to be called a comedy. The comic scenes are never as funny as they are intended to be, and when the movie goes for cheap laughs (such as a car model's clothes being ripped off during a commercial that's preempting a football game), you feel like you're being played down to a little bit.

Kurt Russell is believable as one of the used car dealers, who's always trying to lure unsuspecting customers across the street and away from his competitor. In one scene, he fastens a ten-dollar bill to the end of a fishing line and casts his net across the street. The ending is somewhat enjoyable, but it comes too late, after the movie has gone on too long, and the characters never quite gel. It's almost as if the writers--director Robert Zemeckis and producer Bob Gale--were too familiar with them to bother to flesh them out for us. With Gerrit Graham and Frank McRae as Russell's assistants (who were my favorite characters in the movie), Deborah Harmon, Joe Flaherty, David Lander, Michael McKean, Michael Talbot, Al Lewis (who is very amusing as a judge), and Dub Taylor. Executive produced by Steven Spielberg. 113 mins. ★½
by Jacob Lusk @ pannedreview
Email ThisBlogThis!Share to TwitterShare to FacebookShare to Pinterest
Tags 1980, Al Lewis, Gerrit Graham, Jack Warden, Kurt Russell, Michael McKean, Robert Zemeckis