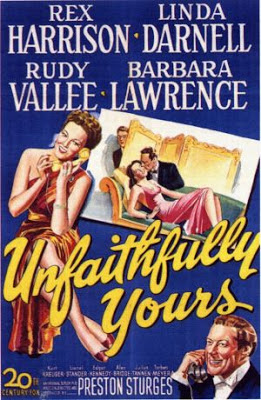 A wonderful screwball comedy from 1948 in which Rex Harrison plays a celebrated symphony conductor who begins to suspect that his wife (Linda Darnell) is having an affair with his assistant (Kurt Kreuger), even though she's just about the most doting, adoring, attentive wife ever conceived on the big-screen. Watching Rex Harrison become a paranoid, angry wronged husband proves to be quite amusing, especially when he fantasizes about knocking her off and framing her alleged lover. You see the full range of emotions a man goes through when he feels that his wife has been unfaithful to him. Despite its black comic touches, it's an immensely light-hearted affair, and the dialogue is fast and witty. Written and directed by Preston Sturges. With Rudy Vallee, Barbara Lawrence, Lionel Stander, Edgar Kennedy, Al Bridge, and Julius Tannen. 105 min. ★★★