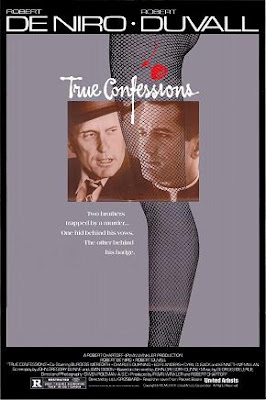 True Confessions (1981) is a story about rot and how it taints institutions like the Church. It's also loosely based on the grisly Black Dahlia murder case. The film is set in Los Angeles in 1948, and the focus is on two brothers: one a priest (Robert De Niro) who schmoozes with wealthy laymen in order to get funding for church buildings, and the other a hardboiled detective (Robert Duvall), who's a cynic. He's seen the corruption of religious institutions first hand, and it's no different from the corruption of law enforcement or any other supposedly pure organization.

When Duvall's character confronts a big-time construction magnate (Charles Durning) who's been helping out the Church, he unflinchingly mocks the man's moral character, and he gets something of a kick out of doing it. He's overly pleased with calling people out, but then he has a right to be infuriated when the Church celebrates a man who frequents prostitutes. But he's a hypocrite, too. Near the beginning of the film, he does the Church a favor by removing the corpse of a priest who suffered a fatal heart attack while visiting a house of ill fame. It would be a nasty scandal for the Catholic Church and in particular his brother, so he takes care of things for them.

True Confessions, which was based on John Gregory Dunne's 1977 novel and adapted by Dunne and Joan Didion, seems to be reaching for profundity when it exposes the rot with which it is so consumed. But when the police are investigating the brutal murder of a young woman found in a vacant lot (she was cut in half and eviscerated), they treat the murder as though it were a routine, unremarkable event. There's no feeling for her or for the particularly horrifying circumstances of her death.

It's only later that Duvall's character develops a kind of sympathy for the murdered girl, as well as a compulsive desire for justice, which he finds is just as elusive as the mysterious girl herself. It's hard to buy his sudden transition from callousness to compassion, because Duvall's character is a grim, pasty, unfeeling cardboard cutout out of a detective character from the 1940s. He's Humphrey Bogart without the charm and fast-talking wit. He has a sense of humor, to be sure, but he doesn't talk in all the lovely double entendres Bogart did in The Maltese Falcon or The Big Sleep.

De Niro too seems embalmed in True Confessions, and he appears as though he had no idea of how to play the priest any other way. It's probably a fault of the writing, which vacillates clumsily from murder mystery to morality tale to family drama, never successfully getting across any concrete ideas about any of them. Instead it just pounds us over the head with its one crystallized theme: Rot. By the end of the movie, you certainly feel it spreading, and it makes you wish the whole experience were over sooner. (And, there's a wedding scene near the beginning that has echoes of The Godfather, as though they were trying to make a film about the Catholic Church on that level; it's merely a reminder of how pale a comparison True Confessions is.)