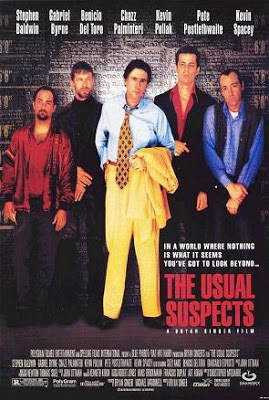 I hold to a sort of unwritten rule when it comes to writing fiction of any kind: Don't let the plot twist drive the story. Plot twists are tantalizing, which is why they often intoxicate writers, but the screenplay written by Christopher McQuarrie for The Usual Suspects is nothing more than a long, drawn-out red herring. Everything about the movie hinges on its now famous surprise ending, which I will not divulge here in case someone reading doesn't know. (I did know, going in, which was a little frustrating, but I did still find myself getting suckered just a tad.)

The reason plot twists are deadly for stories--if indeed the stories exist solely to surprise us with the twist at the end--is because everything, from the plot to the characters to the order of events to the ways in which the story is told, becomes a device, a pawn in the author's game of tricking the audience or the reader. Not only does it become shamelessly manipulative at some point, it also forces the writer to relinquish a certain amount of richness that comes from making the characters the actors and not the pawns. When a movie is character-driven, the twist is the icing on the cake and doesn't necessarily make or break one's enjoyment of the film.

The Usual Suspects is just one big build to the end, and it's a surprisingly humorless crime film, full of needlessly complex developments and dialogue and hopelessly in love with its own cleverness, as inane as it really is. Director Bryan Singer doesn't help much. He seems to be at the mercy of McQuarrie's script too. In the end, The Usual Suspects is little more than a pastiche of Singer's and McQuarrie's cinema favorites. They're trying to pay homage with a clever update of crime and noir films for the 90s. But there were several better homages of that decade, namely L.A. Confidential (1997). (See also Jackie Brown, also 1997.)

The difference between a film like this and the far superior L.A. Confidential is partly one of style, and partly one of characterization. L.A. Confidential mined the richness of its oddball, displaced characters and managed to weave this exploration into the overall story. The Usual Suspects just deals in smoke and mirrors. The plot involves five criminals who team up while in prison to do a job involving lots of money and cocaine. But it turns out that someone has double-crossed them, and there's a lot more going on than they think. (The reverse is true for the viewer: there's a lot less going on.)