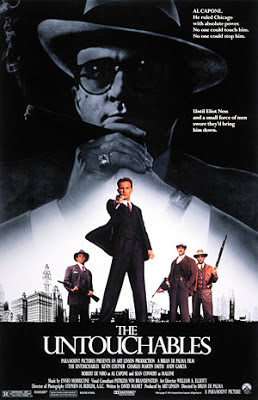 After seeing The Untouchables (1987), I finally understand that joke in The Naked Gun 33 1/3, where Leslie Nielson imagines himself fending off gangsters on the stairs of the train station while a baby rolls down the steps in a carriage, its mother screaming in panic. It was lifted right from The Untouchables, and it was impossible for me to keep a straight face during that long, drawn-out scene, with the Nielson movie playing in my head. We actually see the mother mouthing the words, "My baby!" in slow motion. And let's not forget that it takes an excruciating three to four minutes of watching her struggle to get the damn carriage up the stairs before Elliott Ness begrudgingly offers her assistance, knowing that any minute the bad guys will come through the doors of the station and he'll be at a disadvantage helping this woman out.

That pretty much sums up The Untouchables: it's a drama queen of a movie, full of director Brian De Palma's tendencies toward hyperbole, and brought to a fever pitch by Ennio Morricone's score, which turns every scene into a touchdown set to an anthem. At times, the music takes on a very 80s-sounding beat via drum machine and you have to wonder how that made it to the final print.

Brian De Palma obviously tried to imbue every scene with the weight of the "I could have been a contender" speech from On the Waterfront. But then again, De Palma has never tried to hide his lack of subtlety, and sometimes, his gaudy directing works well, as it does in much of this movie, in spite of itself. It's a wonder that, as much as this movie desperately wants to be great, it manages to be quite watchable and emotionally affecting.

Yes, The Untouchables is a grandly entertaining movie, even when it's ridiculous. Seeing it reinforced for me both the greatness of The Godfather and the inferiority of the more recent Gangster Squad. I was grateful that Untouchables falls somewhere in between, leaning towards greatness but not quite getting there. It's helped along by the wonderful performance of Sean Connery as Malone, an aging beat cop who becomes the mentor of Elliott Ness. Connery won a much-deserved Oscar for his performance. Even Kevin Costner's performance works. He's a dull actor, but in this kind of role, as the determined Ness, a staunch upholder of the law fighting the bootlegging industry, his banality works better than you might think. The movie would have faltered with a more dynamic actor (say, a Michael Keaton, perhaps) in the role. And Costner's not even as banal as he usually is, perhaps because he's surrounded by a number of vibrant performers, including Connery and Robert De Niro as Capone.