The Return of the Living Dead Part II 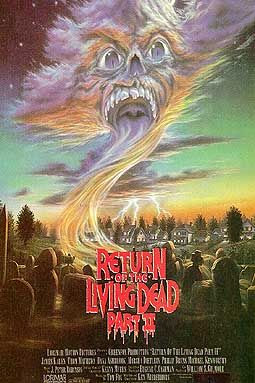 This sequel to Dan O'Bannon's 1985 film The Return of the Living Dead (which was in itself a darkly comic indirect sequel to George A. Romero's Night of the Living Dead) is a bit too obviously jokey. Writer-director Ken Wiederhorn tries to have fun with the shambling, brain-eating zombies (who are revived by a chemical called 245 Trioxin and have an insatiable hunger for brains), but his idea of comedy is pretty infantile: zombies getting their heads stepped on by other zombies as they emerge from their graves, a decapitated head cracking jokes in an inane voice, a severed hand that is tossed around like a hot potato. (It throws us the finger in a close-up shot.) Not exactly subtle. And many of the characters spend the entire film screaming at the top of their lungs and repeating words multiple times. This is another sign of a feeble attempt to be clever and funny.

What's worse is the offensively inept music score, which was replaced by a better, more competent one in theaters (and on VHS), but for some reason was retained for the DVD. It's a cheesy, poorly synthesized score that makes the movie feel like The Muppets Living Dead, only it's not as clever as the Muppets. (You can access the better music score on the DVD if you switch to the French audio. So all the French speaking ROTLD 2 fans really lucked out.)