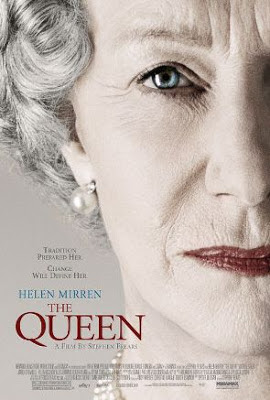 Helen Mirren acts with a lot of restraint and good judgment as Queen Elizabeth II, whose refusal to react publicly to the death of Princess Diana in 1997 caused a public outcry. The Queen (2006) is an intriguing little political drama, particularly because it manages to be both critical and sympathetic toward the Queen, whose decision not to make any kind of public statement about Diana's death is based in her belief that part of the job of being Queen is maintaining oneself publicly. Only after the persistent encouragement of the newly elected Prime Minister, Tony Blair (Michael Sheen), does she finally relent, conceding to the overwhelming evidence that the world has changed, and the world she knows and operates in no longer exists.

The script by Peter Morgan manages to avoid cheap sentiment, and director Stephen Frears doesn't cave in either: the tabloid aspects of this story (Princess Diana herself being the chief one) are not played up. Rather, this film is interested in looking at the political life of a country that has one foot in the past and one in the future: a monarch performing a lot of ceremonial duties (such as offering a formal invitation to the Prime Minister, which seals his election) that mean something, but not much. The old institutions are suspect to the new generation that would rather have a Queen relate to them on a kind of gooey, feel-good emotional level. Essentially, they want an Oprah, not a queen. You end up sympathizing with Elizabeth more and more.

With James Cromwell as Prince Phillip, Helen McCroy as Cherie Blair, Alex Jennings as Prince Charles, Sylvia Syms as the Queen Mother, Tim McMullan, Mark Bazeley (who offers up an enjoyably wry performance as Blair's strategic assistant). The film uses real news footage more adeptly than you might think, and manages to create a vivid sense of realism without sensationalizing a story that was (and still is) sensationalized in real life. 103 min. ★★★