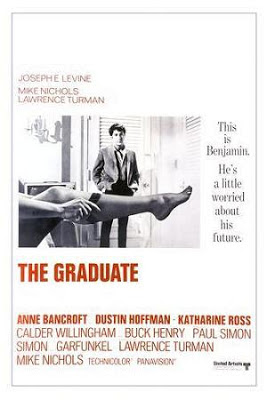 The ending of The Graduate (1967) is worth sitting through the whole rest of the movie, which is alternately amusing and unpleasant.

Dustin Hoffman plays the main character, Ben Braddock, a recent college graduate who is propositioned by the wife of his dad's business partner. Her name is Mrs. Robinson, and she wears fur coats and leopard printed dresses and has a streak of white in her brown hair: it's not exactly a subtle comparison that the scriptwriters--Calder Willingham and Buck Henry--are making: she's a tiger stalking her prey. Thankfully, Anne Bancroft plays her with delicious cunning and restraint. She utters every word as though she'd just as well not speak at all, and she exercises almost pathological patience with Ben as she leads him into bed without letting him realize it. He's an awkward, oblivious young man who's worried about his future, and by the time the trap has been laid he's too caught up in it to get himself out.

I first saw The Graduate when I was about thirteen, and I was too young to really grasp the impact that this film had: it was part of the counter-culture, simultaneously inscribed by it and inscribing it, and a member of a small club of popular films from the 1960s that represented a sort of cinematic and cultural revolution. Others include Bonnie and Clyde, The Wild Bunch, and Midnight Cowboy. The Graduate, with its Simon and Garfunkel music throughout and its self-aware hipness, is a kind of a comic critique of American values: Ben, the privileged upper-middle-class college boy has had everything handed to him, and now at 21 he feels completely at a loss about what to do with the rest of his life. Mrs. Robinson, who years ago was forced into an unhappy marriage because she was pregnant, is an alcoholic and obviously isn't getting any satisfaction from her husband. (They have separate rooms and live amongst each other rather than together.)

In one scene, Ben is forced to show off the scuba diving suit his father bought him, and once he's submerged in the swimming pool, he just lays at the bottom, weightless but feeling smothered by the expectations of his parents and their friends. For most of the movie, the message is: ignore the established values. They are lies and they lead to unhappiness. Break the rules.

But when Ben meets Mrs. Robinson's charming daughter Elaine (Katharine Ross), who's on break from Berkeley, he falls for her, which knocks the jealous, conniving mother out of the loop. Apparently love trumps lust, and suddenly The Graduate turns into a more traditional kind of love story. When Mrs. Robinson threatens to tell her daughter about the affair with Ben, Ben beats her to the punch, hoping that his directness will prevent a breakup. But Elaine is furious and heartbroken, and she heads back to college in disgust with Ben. Now he must win her back, and that's when we get to the finale. [SPOILERS] It's such a famous scene: Ben pounding on the glass of the window overlooking the sanctuary, all the wedding guests staring at this raving madman in stunned silence, Elaine looking conflicted but flattered that someone would come for her in such a grandiose style: She's trying to decide whether to stay with the man she's just married or run off with Ben. When she finally does run off with him, the movie once again takes up its counter-culture cross, almost literally: Ben brandishes a big gold cross, fending off the angry wedding party, and then shoves it into the door handles to lock everyone inside the church.

As Ben and Elaine flea the church and hail a bus, we're left with the looks on their faces: It's almost an "I've made a big mistake" moment (ala Arrested Development), except their expressions are more vacant than that: the elation of breaking the rules is already wearing off, and suddenly they're left with real life and all its questions and monotonies. Whether you follow the rules of society or not, sooner or later, the familiar will get you: the dangerous routine will impinge the happy couple.

The Graduate holds up fairly well, but it always leaves me feeling depressed, perhaps because one of the aching truths it wrestles with is that horrible feeling of sinking into a routine, which is so frightening for some and so comforting for others. Or perhaps it's just my puritan upbringing rearing its ugly head. Directed by Mike Nichols. With William Daniels, Murray Hamilton, and Elizabeth Wilson. ★★★
by Jacob Lusk @ pannedreview
Email ThisBlogThis!Share to TwitterShare to FacebookShare to Pinterest
Tags 1967, Anne Bancroft, Dustin Hoffman, Elizabeth Wilson, Katharine Ross, Mike Nichols, Murray Hamilton, William Daniels