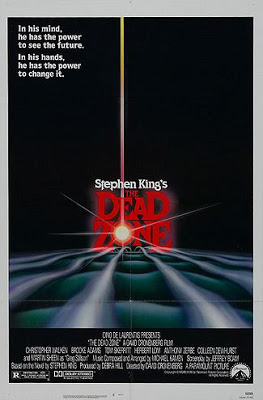 Rarely do horror movies allow for such an affecting character to come to life as in The Dead Zone (1983), which was directed by David Cronenberg and scripted by Jeffrey Boam, who adapted Stephen King's novel. The movie itself is an episodic tale of an English teacher named Johnny Smith whose near fatal car crash leaves him in a coma for five years. When Johnny finally awakens, he's a changed man, blessed (or cursed) with the ability to see people's fates by the slightest physical contact.

Johnny is played by Christopher Walken, and he's already sort of grim looking before the accident: he reads Poe to his students and you can tell he's far more interested than they are, and then he sends them off with a reading assignment: The Legend of Sleepy Hollow. Johnny is a sort of modern-day Ichabod Crane. Walken is a tall, memorably distant looking actor. He's always sort of brooding but with a mixture of hopefulness in his vision. He turns this film, which might otherwise have been a somewhat calculated and commercial thriller (particularly for Cronenberg: this is his most mainstream movie that I've seen), into a powerful vehicle for his acting out the teacher's haunted existence. He saves lives but becomes something of a parlor trick, and he wrestles with God, especially when his fiance (Brooke Adams) abandons him and marries someone else during the five-year-coma.

The most interesting story thread--and the one that closes out the movie--involves Charlie Sheen as a smug politician who we understand will one day become a nuke-happy dictator unless Johnny acts quickly. Thus the movie gets to ponder the implications of interfering with human history: Johnny asks his doctor, Would you go back in time and kill Hitler if you could?

The movie is hampered by its humorlessness. It's grim throughout, and the surroundings--New England in Winter (although the film was shot in Cronenberg's native Ontario)--don't help. But it's an effective thriller, punctuated by a series of well-made sequences featuring Johnny's skills (including one where he assists the chief of police in the investigation of a serial killer).