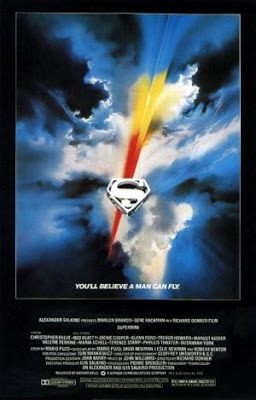 Generally, comic book movies are insufferable. Superman (1978) is an exception. Despite its bad special effects, which were dated even in 1978, and its cornball, rah-rah-America attitude, Superman works. It's enormous fun. You never take Superman too seriously, even when he proclaims his motto about fighting for "truth, justice, and the American way." Christopher Reeve plays him just a little tongue-in-cheek: he doesn't enshrine his character with self-importance. And it's hard to find a more entertaining villain than Gene Hackman as Lex Luthor, who may be evil but at least manages to be funny and colorful at the same time, especially when he's insulting his flunky, Otis (Ned Beatty), a delightfully bumbling underling, or condescending to his bosomy assistant Miss Teschmacher (Valerie Perrine). Hackman looks like he's having a ball as the criminal mastermind, and his digs are quite impressive: he lives under the subway in some kind of subterranean palatial apartment. Luthor is buying up a bunch of worthless desert land along the San Adreas fault, and once he causes a massive earthquake that knocks the good half of California into the ocean, his crummy real estate will be worth a fortune.

Of course the whole Superman idea is a bit corny: He's the nearly-perfect superhero, not complicated by internal struggles or morality the way Batman or other superheroes are. The original Superman comic book (created by Jerry Siegel and Joe Shuster) debuted during the Depression when it was conceivable that kids needed a role model who was impervious to everything, including hunger pangs and the moral corruption that tends to accompany extreme poverty and want. In the 1970s, the appeal of Superman was to moral corruption and decay at a higher level: A post-Vietnam and post-Watergate America must have seemed like fertile enough ground in which to plant this superhuman boy scout with a red cape and goofy tights. The writers of Superman (there were quite a few of them: Mario Puzo of The Godfather, David and Leslie Newman, Robert Benton, and Tom Mankiewicz) must have sensed that they needed their superhero to be mildly funny and self-aware to balance the goody-goody image. And yet Superman is never self-effacing. In that way, the movie gives us a good time without being ashamed of itself.

With Marlon Brando as Superman's father, Jorel, the stoic intellectual of the planet Krypton, who foresees his people's imminent doom and sends his infant son off to earth in a weird little vessel with pointy crystals protruding from every which way; Margot Kidder as plucky Lois Lane, the reporter who works for the Daily Planet and steals Superman's heart; Glenn Ford and Phyllis Thaxter as Superman's earth parents; Jackie Cooper as the editor of the Planet; Marc McClure as Jimmy, photographer for the Planet; Jeff East as the teenage Clark Kent/Superman; Susannah York as Superman's real mother; and in small parts that serve as a setup for the sequel, Terrence Stamp, Sarah Douglas, and Jack O'Halloran as three Kryptonian criminals sentenced to eternal imprisonment in a glass, square prism that forever hurdles through space.