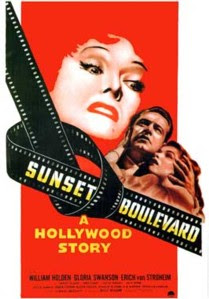 In 1950, there were two films about aging actresses played by aging actresses. There was All About Eve, the deliciously funny picture about Broadway star Margo Channing (Bette Davis), whose career is threatened by a malicious young fan. And then there was Sunset Boulevard, about a star of the silent age named Norma Desmond (Gloria Swanson), now living in seclusion in her crumbling mansion on the titular street.

The story is narrated by William Holden, who plays Joe, a struggling writer who turns into Norma's long, secluded drive one afternoon when he's trying to evade the men who are about to repossess his car. He parks in the large, multi-car garage--thinking the house to be abandoned--and then walks around. Soon he's pulled into Norma's bizarre and lonely world. She has one man, Max (Erich von Stroheim), who takes care of her as if she were his daughter. She lives enshrined in the past, before sound ruined her career. There are photographs of her cluttering every room, and she has her own movie screen and projector so she can sit back and relive the past.

Sunset Boulevard is a sharp dark comedy: it's a dead-on look at the rotting capabilities of fame and the delusions of people who try to prolong their youth and popularity. The film is a bit poky in the middle, but it certainly retains its morbid fascination, even sixty-some years later. It's like staring at tabloids in the supermarket: you can't look away.