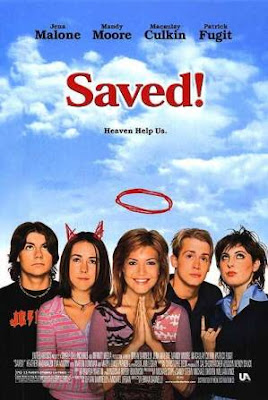 Saved! (2004) is quite a treat. It manages to make fun of the shallow hypocrisy of some fundamentalist Christians without dehumanizing them. The story involves a devoutly religious high schooler (she even attends a private Christian school) named Mary Cummings (Jena Malone), who is greatly troubled when her boyfriend Dean (Chad Faust) tells her he's gay.

Mary decides it is her spiritual mission to save Dean and drive out his homosexuality, so she sleeps with him. Soon after, Dean's secret is discovered by his parents and he's sent off to a Christian recovery center called Mercy House. Then Mary finds out she's pregnant. Will she get help from her mom (Mary Louise-Parker), who's fighting an attraction to their unhappily married minister (Martin Donovan)? Or from her best friend, a super-Christian named Hilary Faye (Mandy Moore)? No, instead she finds it in the Jewish outcast who was forced to attend their school (Eva Amurri, a wonderfully irreverent sprite with a real flair for comedy) and the brother of the super-Christian (Macaulay Culkin), who was paralyzed after a fall and whose handicap is a kind of cross for his sanctimonious sister to bear.

It's incredibly hard to make a movie that is both honest and satirical about evangelical Christian culture but somehow not mean-spirited. Amidst all the bizarre and sometimes unthinkable behavior of the Christians (which was frighteningly accurate in some cases, coming from someone raised in that culture), there was redemption, particularly between Mary and her mom, who is forced to reconsider some of her beliefs about people and relationships when things like teen pregnancy hit close to home. And there was something beautiful in the way Mary grows closer to people she had initially written off as "less-than" because of their perceived lack of faith. They were the ones who loved her the best when her own failings became unavoidably public.

While Saved! sometimes feels contrived at times--it is still a pretty traditional teen comedy in some ways, resorting to many of the familiar plot devices (such as setting its big showdown at the prom, and featuring a whole teen pregnancy story line in the first place)--it's a deliciously fun movie, and the fresh young cast transcends the more obvious parts of the script. Even Macaulay Culkin is likable. He gives a confident, almost laid-back performance. Directed by Brian Dannelly, who co-wrote the screenplay with Michael Urban. With Patrick Fugit (as Mary's love interest), and Heather Matarazzo (who plays the girl everyone ignores). 92 min. ★★★
by Jacob Lusk @ pannedreview
Email ThisBlogThis!Share to TwitterShare to FacebookShare to Pinterest
Tags 2004, Chad Faust, Heather Matarazzo, Jena Malone, Macaulay Culkin, Mandy Moore, Martin Donovan, Mary-Louise Parker, Patrick Fugit