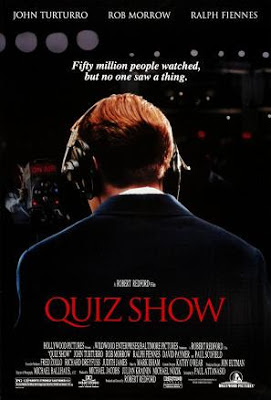 Robert Redford's Quiz Show (1994) covers a scandal involving game show contestants who were given answers ahead of time. It's set in the late 1950s, with Rob Morrow as a hotshot Congressional lawyer who begins to suspect that the producers of a show called Twenty-One have been rigging the game for years. Then one of the contestants starts speaking up about being forced into giving a wrong answer to make way for the next big contestant, Charles Van Doren (Ralph Fiennes), a promising young intellectual with an impressive literary pedigree: His father is the writer and distinguished Columbia professor Mark Van Doren.

The trouble with Quiz Show is that it never captures your interest. Redford's direction is so carefully calculated in every single second that the film seems blandly important, as though we ought to be riled up by the film's subject matter--the encroaching power that advertisers have over us through television, and the ways that they maneuver supposedly authentic "reality" television shows to keep the audience glued to the screen. These are fascinating ideas in real life, and they're truly infuriating, but this movie fails to ignite them. That's also partly because the characters are so dull. Fiennes doesn't exactly impress as the young literary type: his character has had everything handed to him, so it's hard to feel much sympathy for him.

There is an admittedly powerful scene near the end when Charles Van Doren reads an apology before the Congress, and a politician tells him he shouldn't expect praise for simply telling the truth for once: the crowd erupts in applause, and Charles looks like he's been squashed. It's an effective moment.

Rob Morrow is a charming actor, but his Boston accent is a bit muddy here, and he's not given enough real drive. Everything about his motivation to initiate the investigation into the quiz show scandals seems  too banal: he's just trying to avoid working on Wall Street, so he digs around and looks for trouble, and when he's lucky, he finds it. The film doesn't allow him to show off his naturally funny personality: he looks like an amiable frat boy, and that playful side is squelched by such a serious role. (Although even here he's always smiling; it just comes off as arrogance.)

There is one good idea in all of this: that in the end, television is too powerful, and already too deeply ingrained in our culture, to be defeated by the government or any other entity. The real bad guys--the advertisers who prey on our gullability and our needs--can't be stopped. Middle men take the fall and the scandals are forgotten to be repeated again other day. And maybe then nobody will even mind. That's a cynical outlook, but it rings true, and it's the most authentic and believable idea in Quiz Show.

Written by Paul Attanasio. Starring John Turturro, who plays the first contestant, and who's mocked for being Jewish but displays all the grating stereotypes about Jewish people, as though the movie wanted to have it both ways: he's condemned for being Jewish, but he's genuinely annoying; with David Paymer, Paul Scofield, Hank Azaria, Christopher McDonald, Elizabeth Wilson, Johann Carlo, and Mira Sorvino. Produced by Redford. 133 minutes. ★★