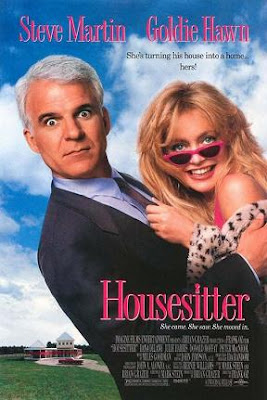 Steve Martin and Goldie Hawn work so well together that it's a wonder they didn't make a movie sooner than they did. Housesitter (1992) is yet another modern Hollywood attempt at channeling 1930s screwball comedies. The only trouble is that it's too carefully plotted to truly resemble the kind of fast, improvisational, fluid comedy to which it's paying tribute. However, Housesitter is a fun romp, bolstered by the performances and the chemistry of the two leads.

Steve Martin plays Davis, a struggling architect whose girlfriend dumps him after he proposes to her in front of the house he designed just for her. The house is in the quaint Massachusetts town Davis grew up in, but he works in Boston. Back in the city, he meets a colorful waitress named Gwen (Hawn) and in a weak moment--after telling her the whole story--has a one-night stand with her. Then she moves into the house and pretends to be his wife, winning over the whole town (including his parents) with her elaborate deception. In fact, Gwen turns out to be an expert storyteller: you never know when she's telling the truth.

This is Goldie's movie: she's always been such an engaging and appealing flake, and here she's balanced in her flakiness by Martin, who's grounded but reveals his own inner-flake at certain moments. The development of their relationship (which is admittedly predictable) is too much fun to dismiss the movie for its conventional plotting.