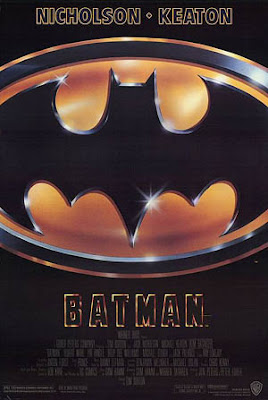 Like Superman, Batman (1989) suffers a little because its villain is more dynamic than its hero. But director Tim Burton masterfully builds up the atmosphere in this imaginative and smashing piece of entertainment. Burton's Batman represents a sort of happy medium for me: it's not as campy as the 1966 Adam West film, and it's not as humorless as Christopher Nolan's Batman films. It's got both the camp and the seriousness in proportion.

Michael Keaton plays Bruce Wayne/Batman, and it's interesting to see such reserve from the actor who played Beetle Juice in Burton's previous film. Keaton seems to represent both ends of the spectrum with these two performances. As Beetle Juice, he was zany and utterly off-kilter (yet controlled). As Batman, he's perhaps a bit underwhelming. But he gives Bruce Wayne a certain amused quality when he interacts with journalists and police, as if he's having a good joke--not so much at their expense as without their knowing about it.

Jack Nicholson might be too easily praised for his work in Batman. We all know he's good at playing a psychopath, and in particular he plays characters who go insane but were never believably sane to begin with (e.g. The Shining). Still, it's hard not to be pleased with his performance as the gleefully maniacal Joker. He gets almost all of the funny lines in the script (by Sam Hamm and Warren Skaaren), and he gets the flashiest clothes. He's at his best when he's doing a clownish little dance as he shoots crime boss Jack Palance (for revenge), or when he makes some ridiculous joke and you can see his own face register the fun he's having.

Kim Basinger plays Vicki Vale. She's not a particularly strong actress, but viewing the film this time around, I was struck by the fact that her weakest moments occur when she has a crummy piece of dialogue to deliver, such as "I just have to know if we're gonna try to love each other." I don't think anyone shy of Bette Davis could make much out of that kind of writing, so it's not fair to blame Basinger entirely. With Michael Gough as Alfred, Tracey Walter, Robert Wuhl, Pat Hingle, Billy Dee Williams, and Jerry Hall. The vibrant, memorable score was composed by Danny Elfman. 126 min. ★★★
by Jacob Lusk @ pannedreview
Email ThisBlogThis!Share to TwitterShare to FacebookShare to Pinterest
Tags 1989, Billy Dee Williams, Jack Nicholson, Jack Palance, Jerry Hall, Kim Basinger, Michael Gough, Michael Keaton, Pat Hingle, Robert Wuhl, Tim Burton, Tracey Walter