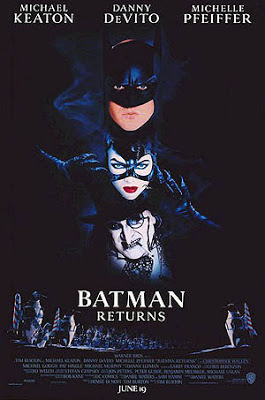 Director Tim Burton takes us back to the comic book city of Gotham, now ensconced in winter and looking pretty gloomy, just in time for a new villain: the Penguin (Danny De Vito). After being abandoned by his rich parents because he was "different," the Penguin lived life in the Gotham sewers. Somehow he also managed to become a crime boss and maintain control over a whole cadre of actual penguins who were living down in the sewer. (Is this normal? Are there penguins living in every urban sewer?) DeVito is dreadful as the Penguin: he's too nasty, too sinister, too corrupt, to be entertaining, and he chews up every line before spitting it out at us. I missed Jack Nicholson's gleeful madness as the Joker.

There are other villains: the Catwoman (Michelle Pfeiffer), and a greedy corporate executive (Christopher Walken) with a frightening shock of poofy grey hair. I was hoping that Pfeiffer would save the movie: she plays a flighty secretary who keeps getting ignored or taken advantage of by men and then finally creates the Catwoman persona. Donning a sexy, skin-tight outfit (all black) and a whip, as well as an endless supply of bad double entendres, she goes out to make her newfound power known. The first thing she does is rescue a woman from a would-be rapist, but quickly we learn that she's much more interested in getting her own name to the public than in protecting women who were once like her. This is perhaps more interesting, but the Catwoman comes off as rather shrill and thoughtless. She would have been a more compelling character otherwise.

And then finally Batman (Michael Keaton) comes back into the movie, but he's even less compelling than he was in the 1989 film. This is because in Batman Returns he seems so reactionary, so loosely connected to the other characters that his involvement feels superficial. Batman is a difficult character to act out: he's always brooding, and that doesn't leave an actor much room for any humor (except the bad puns that the series became famous for in this and other sequels). It's especially hard to take with Michael Keaton, whom we know is capable of boiling water with the intensity and sheer zaniness of his Beetle Juice performance.

Keaton doesn't get to be comically endearing in the Batman movies, and thus his character is lost in the shuffle of Batman Returns, which is truly a mess of a movie. The script is by Daniel Waters (who wrote Heathers), and it might have looked good on paper, but on film's it's like a circus that never ends. And the set design doesn't resemble the first Batman, further distancing the two films. Director Tim Burton's style is evident here too: this may be the movie that officially pushed him in that uber-Burton direction which would eventually be a road to careericide with pictures like Dark Shadows.