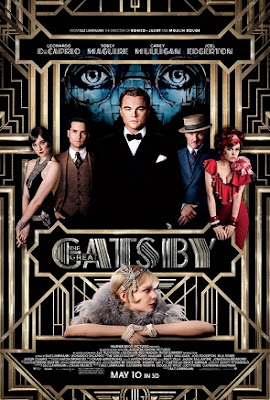 The casting isn't half bad: At thirty-eight, Leonardo DiCaprio finally looks thirty, and he's good as Jay Gatsby: he's got that glint in his eye which betrays the secrets haunting his character's labyrinthine mind, and that charming grin that locks the viewer into place as a willing participant, going along for the carnival ride concocted by Jay Gatsby, a sort of social magician if you will. He's the ultimate American: the man with enough charm and brains to re-invent himself from the poor farm-boy to the rich, enigmatic darling of the New York social scene. All the time I kept thinking that this is what might have happened to Pip, the orphan from Great Expectations, if morality hadn't gotten in the way at the end. No, DiCaprio finally seems well-cast here, as he was in Django Unchained, playing a part that was so much fun and so much out of the ordinary.

Now that DiCaprio has played so many iconic roles--Howard Hughes, J. Edgar Hoover, etc.--I'm hoping he's gotten these Oscar-baiting movies out of his system. Perhaps DiCaprio isn't gunning solely for a golden statue, perhaps these are just the most challenging and interesting roles he's being offered, but up until Django I hadn't been very impressed with him or his movies of late. Everything about his performances seemed predictable and tired. He's not particularly different in Gatsby, but it may be that the role itself finally fits him to a tee, and the allure of Fitzgerald's tragic hero rubs off onto DiCaprio the way it did with his character in Titanic with all the fangirls shrieking over him. He's irresistibly handsome, but also hopelessly idealistic. But with the latter characteristic, the movie ignores something crucial in the novel: Gatsby seems aware--whether it bugs him or not--of Daisy's true nature. Gatsby tells Nick that her voice is "full of money," which suggests a deeper cynicism in him than the movie wants to display.

As the vapid spoiled rich girl Daisy Buchanan, Carey Mulligan is also quite convincing: she's petite enough and pale and unassuming enough to be credible as someone whose thoughtlessness is a worse crime than someone else's genocide. This is ultimately the horrible joke of The Great Gatsby: it's a story that applauds the men's pursuit and domination of the women, who turn out to be so shallow and self-interested that we no longer sympathize with them for being treated like objects. They are objects, and they've learned how to be happy within such conditions. (Now I understand what she meant when a friend once told me she disliked how sexist Fitzgerald's novel was.) Daisy says a woman can only survive if she's a fool, and it's apparent that this is an axiom she's taken to heart: but it's also a cop-out, and it's how she gets away with murder and keeps Gatsby at her beck and call.

And then there's Tobey Maguire playing Nick Carraway, Daisy's cousin and Gatsby's neighbor, the narrator of the story and the limpid bystander who gets to live vicariously through his friends. He's a blank, impressionable man, rendered impotent by the privilege of his upbringing. Gatsby, the iconic self-made man, stands next to him as a god, and Nick spends the entire novel (and film) giving alms to him.

But Maguire lacks something: he says his lines clumsily at times, and while his goofy gaucheness seems appropriate for the role of Nick, it also makes him seem more pathetic. He's the least interesting character of the bunch, which may be the very reason Fitzgerald made him a narrator: it ultimately gives him more authority, not less, which is some kind of perverse irony, I guess. But the sleepwalking performance doesn't do much for the film, and what's worse, Nick is our intercessor, dumping out and sorting through the exposition like an archivist. We don't have to do any of the work. It feels forced and obvious, and as much as Luhrman wants to bask in the visual splendor of his wanna-be masterpiece, The Great Gatsby makes the fatal mistake of relying too heavily on telling us information rather than showing it.

What is shown are the wild parties with naughtily-dressed dancers and champagne gushing and oozing out of bottles and confetti floating in the air and Chinese lanterns beaming down on the ground from the trees and strung-out Jazz Age loonies dancing until the dawn and passed-out guests being scooped up by the servants in the sobering morning light. This is all sort of impressive, but sort of cheap: much of the production seems to have been designed on the computer (and indeed, they have been pushing this as the latest 3-D experience, which is beyond irritating), so nothing seems real. I suppose one could argue that that's what Luhrman was going for--an unreal world--but it displaces us. We're left with the plot being fed to us via silver spoon. Granted, Luhrman manages to capture that mysterious pull of Fitzgerald's novel to a degree. He just doesn't succeed all the way. This latest incarnation is too full of eye candy to ever focus its grasp on anything more than a lot of sloppy ideas about love and hope. It never gets at the ache of materialism that Fitzgerald really got across in the book. There are glimmers of that, though, and I don't think it's as bad as some critics have said. It's just proof that The Great Gatsby doesn't ever translate totally to film.

Glad to see you chose to review this one, even as you don't seem to think it really worked. I have heard in a lot of places that Leonardo makes a great Gatsby, no pun intended. I probably won't be able to resist from seeing the film anyway! Have you seen this by chance? http://www.christianitytoday.com/ct/2013/may-web-only/gospel-of-gatsby-and-draper.html

Thanks for your comment. This article is interesting because it gets at something I've been noticing a lot lately: the fact that most of the movies coming out are some sort of male empowerment fantasy. You can apply that label to any superhero movie, any of the fantasy adventures (except maybe TWILIGHT), and certainly to GATSBY.

One of the things that is so irritating about this is that as a result, there are fewer good parts for women, yet so many good actresses working today. Only a handful of them get to dig their teeth into truly interesting roles. Most of the time they play somebody's supportive wife. I'm not railing against supporting wives, but it would be nice to have some variety.

The second thing, which is perhaps more problematic, is that these male empowerment movies reinforce a lot of the lies people tell us about what it means to be a man: you have to be the winner, the man who changes the world. And, as that article points out, you have to do it all on your own. It is vainglorious. It's also incredibly naive, not to mention comical at times.

I enjoy movies that deflate this kind of fantasy because it needs to be deflated. I suppose you could argue that GATSBY kind of does, with the ending, but [SPOILER] it's really Daisy's fault that he dies. That's why I said her thoughtlessness is worse than someone else's genocide. It's the ultimate crime of the privileged, perhaps. She's a woman looking for self-made men so she won't ever have to do anything to "make" herself. We have two people with vastly different but complimentary agendas, neither of which are particularly healthy.

Thanks again for commenting. Definitely got me thinking!