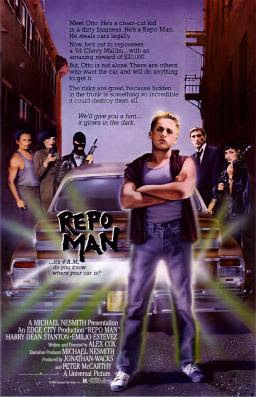 Repo Man (1984) is just about the weirdest movie I've seen in a long time. It's set in Los Angeles, the grungy Los Angeles that resembles every other grungy city full of rundown buildings and displaced persons, and there are enough displaced persons in Repo Man to populate an entire city. It's a punk scifi satire from British writer-director Alex Cox, and it stars Emilio Estevez as an aimless youth who begins working for a team of hardboiled, loony repo men headed by Harry Dean Stanton. All the repo men (and there are several "companies" of them--rival repo men and women--in this film) are on the lookout for a Chevy Malibu being driven around by a doddering old fool who might be crazy or might be drunk or maybe both: there's a 20,000 dollar price tag on the car, and the government's after it too. Men in antiseptic-looking white uniforms and gas masks keep popping up, scooping up dead bodies off the streets and placing them into big government trucks, and there's apparently some glowing, glimmering nuclear waste in the trunk of the car.

The problem with Repo Man is that it never fully crystallizes. Alex Cox apparently had a lot of ideas zooming around in his brain when he wrote and directed this, his first feature, after graduating from UCLA's film school. This is exactly the kind of mishmash a film student would come up with. It has some clever ideas--there are plenty of amusing gags throughout the film that catch your ear or your eye--but a lot of unformed ones too, and the unformed ideas take over. Cox keeps cutting to different scenes with his characters and never allows for enough time to develop either the people or the situations. The minute you feel that the movie might start to gel, he cuts. And this turns out to be a real liability. Repo Man is a junkyard of a movie: all kinds of intriguing parts, loaded with meaning and cleverness, but ultimately disorganized to a fault.

Its biggest asset turns out to be its sense of humor, which has the effect of winning over the viewer. We might feel lost--and we might feel completely at the mercy of a mad director who has no idea where he's going--but at least we're enjoying the chaotic mess of a movie along the way. And Estevez is a fun lead. He's kind of a prick, going after what he wants with no scruples whatsoever: he propositions a girl as though he's asking her for a piece of gum, and he tells his parents he loves them because he's after a once-promised cash gift from his father. (He's disappointed to find that they've already sent the money to some phony televangelist.)