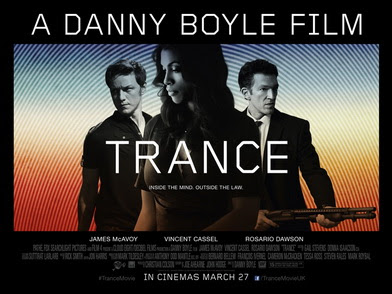 Danny Boyle's Trance is like Inception meets Headhunters (the Norwegian film about a professional art thief who steals a priceless painting from a professional killer). In it, an art auctioneer (James McAvoy) tries to double-cross his partners during a heist, and winds up in the hospital after being hit hard on the head. When he wakes up he can't remember what he did with the painting (a Rembrandt, no less), and his partners-in-crime are furious and ready to kill him. He goes to a professional hypnotist (Rosario Dawson) to try and recover his memory and retrieve the painting. But that's only the beginning. What unfolds is a perplexing labyrinth of "who's playing whom?" type games.

You will likely find yourself being pulled into this murky yet lithe, enticing thriller against your will. The script by Joe Ahearne and John Hodge thrives on keeping the audience in the dark, and Boyle doesn't seem to mind this a bit: we're never able to trust where it's all going, and much of the plot seems unnecessary except that we're counting on some big twist at the end to suddenly connect all the seemingly loose threads to each other. It may help the viewer to know that this does happen, but only at the end, and I did spend much of the time frustrated that there would be no relief to this deliberately complicated movie.

The saving grace of Trance is that, pointless as some of its story developments seem, it's a very entertaining movie. It's like chewing bubblegum and not knowing how long the sweetness will last. But you're content while it does, and it provides enough of the sensations promised to justify its existence. The casting is very good too: McAvoy convinces as the somewhat pathetic auctioneer whose life is in jeopardy; Vincent Cassel makes for both an intimidating and suave mastermind with Danny Sapani, Matt Cross, and Wahab Skeikh playing his cohorts, and Rosario Dawson exudes a kind of sexy control over all the male characters.

The questions Trance raises about our very unreliable memories are probably the most fascinating thing about the movie. These have been asked before, perhaps most recently in Inception (and Eternal Sunshine of the Spotless Mind). But Trance goes the route of science rather than dreams, allowing that the right person with the right training and knowledge can erase someone's memory or help him recall it, and this proves to be a site of anxiety for the movie to exploit. After all, much of if not all of one's identity ultimately finds its grounding in memory and the idea that we are free agents who do things which become indelibly etched into the past, our past. Our memories prove that we have lived. McAvoy's character becomes helpless because of his inability to remember the crucial piece of information--where he put the damned painting--and Dawson becomes a sort of memory shaman.

Trance has a preposterous "what-the-hell" quality that simultaneously puts it in the ranks of the purely entertaining thriller and the purely ridiculous one, depending on the moment. But it's exciting and fun despite (or perhaps because of) its mock-cleverness, which makes it a very hard movie to resist. 101 min. ★★★
by Jacob Lusk @ pannedreview
Email ThisBlogThis!Share to TwitterShare to FacebookShare to Pinterest
Tags 2013, Danny Boyle, James McAvoy, Rosario Dawson, Vincent Cassel