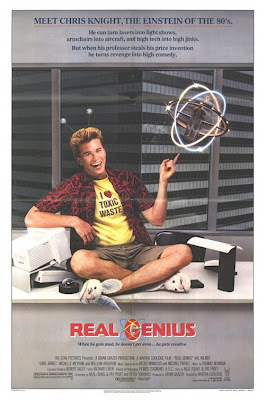 Real Genius (1985) has a group of precocious students at Pacific Technical University developing a laser beam for their professor (William Atherton), who is, unbeknownst to them, working in conjunction with the CIA to use this technology unethically. The plot and characters of Real Genius seem somewhat lazily slapped together by the screenwriters (Neal Israel, Pat Proft, and Peter Torokvei), but Real Genius has a quick wit and an endless supply of one-liners that keep it buzzing along at an agreeable (if overlong) pace. Val Kilmer demonstrates his ability to play the aloof genius with an affable, smartass charm. He plays Chris Knight, the star brain of the college, who welcomes a 15-year-old newcomer, Mitch (Gabriel Jarret), who's something of a child prodigy, into his dorm room and his laboratory.

Director Martha Coolidge has a tendency to let her films ramble along in a breezy sort of fashion. It usually results in likable but unfocused movies like Valley Girl, but in Real Genius the relatively snappy writing helps lift some of that aimlessness. Besides, that aimlessness works better for a film like Genius: it has one of those kids vs. big-bad-adults plot lines that made movies like War Games (1983) seem heavy-handed and simplistic. Instead, you get something a lot more tongue-in-cheek that does not take itself seriously, even when it does resort to the cliches of its particular plot line. The end--in which the professor's house is filled with laser-beam-produced popcorn--is quite odd but very amusing. There's always something slightly surreal going on in Coolidge's movies.