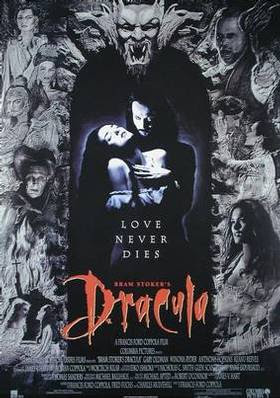 In 1897, Dracula was published and experienced moderate success. Its author, the Dublin-born Bram Stoker, never knew how enduring his novel would become. When German filmmaker F.W. Murnau filmed Nosferatu in 1922, Stoker's widow came after Murnau for violating the copyright she held over Dracula. Florence Stoker wasn't able to stop the movies from getting at her late husband's most interesting and most sustained novel, but she did receive some remuneration from Universal when they made Dracula in 1931. And yet, if Dracula hadn't been made all the more popular on the stage and then on screen in these two afore-mentioned films, we likely wouldn't be talking about it today.

First of all there was a much more popular horror novel released in 1897: Richard Marsh's The Beetle, about a shape-shifting bug terrorizing London in much the same fashion as Count Dracula. The Beetle was forgotten (no movies have been made of it to my knowledge) and even though it has recently experienced a sort of literary resurrection among critics, it effectively switched places with Dracula after Stoker's novel was adapted to the big screen. Second, there was another vampire novel from 1897 called The Blood of the Vampire, by the prolific Florence Marryat. Marryat's vampire, Harriet Brandt, was a psychic vampire: she drained the life out of people without resorting to fangs and bloodsucking. And Harriet wasn't affected by sunlight or crosses or holy water. But like Dracula, she was cursed. (Harriet was mixed: her father a white scientist with an interest in vivisection and her mother a black slave and voodoo priestess from the island of Barbados.) I have often wondered what vampire movies would have been like if Marryat's had been the lasting work and not Stoker's. Would we have been stuck with Twilight either way?

Fast forward to 1992 and the release of Bram Stoker's Dracula, directed by none other than Francis Ford Coppola (The Godafther, Apocalypse Now). Watching it for the third or fourth time, I am struck by the visual splendor and ecstasy of Coppola's version. He and screenwriter James V. Hart point up the erotic overtones in the novel. The film's visual composition has a sense of passion that makes this a supremely interesting movie to watch. It's a breathtaking, thrilling, visceral movie visually speaking: the black silhouettes against an angry orange sky during the scenes of the Crusades that initiate our understanding of Dracula the warrior (although the book doesn't really touch on this much); the howling wolves in the distance as Jonathan Harker changes carriages en route to Count Dracula's foreboding Castle deep in the Carpathian mountains of primitive Eastern Europe; the grey, grim yet Dickensian-looking skyline of 1890s London; the stark reds and greens that permeate the entire film, from the backdrops to the costumes to the blood and the flowers.

As for the plotting, Dracula unfolds in a relatively straightforward and faithful way, except for the beginning, which is an attempt to link the fictional Dracula to his alleged historical persona, Vlad the Impaler. Even when the film seems a bit poky, there is the beauty, the sheer intensity, the sensationalism, as well as the passionate music score of composer Wojciech Kilar. Coppola's ability to turn up the suspense and the terror is quite limber and surprising, and there's a sick, amusing sense of humor in the movie too. Even though this rarely if ever turns campy, it's an unashamed celebration of the excess of Gothic sensibilities. Gothic novels, going back to 1764's The Castle of Otranto, have always fixated on the passion and darkness that rattled and sometimes derailed modernity's reliance on things like science and rationalism. That is the chief allure of a story like Dracula: it's simply genius to have a vampire leave the superstitious culture of Eastern Europe and head to the mecca of European progress and imperialism: London. Nobody believes in vampires there--and even God has become a relic, removed very much from the common life of the modern world--so Dracula is free to feast on the blood of unsuspecting British ladies Mina (Winona Ryder) and Lucy (Sadie Frost, who really ratchets up Lucy's burgeoning sex drive) with hardly anyone to suspect his existence.

Gary Oldman plays the Count, and he imbues him with a sense of loss and emotional torment without sacrificing the qualities that make Dracula a dangerous and frightening enemy of pure British sensibilities. Anthony Hopkins--presumably trying to balance the scales after playing such a memorably devious character as Hannibal Lecter--has a fun time playing Dr. Van Helsing, the eccentric metaphysician and philosopher who figures out what's terrorizing the English ladies; Keanu Reeves is a bit of an embarrassment as Jonathan Harker, especially since his British accent fails to hide that stoner-surfer tone in his voice. But Reeves is handsome and works as a sort of 90s Joe Dallesandro, as though Coppola were nodding a little to Andy Warhol's 1973 Dracula movie. Reeves is also fairly convincing whenever he's being defiled by Dracula's three lascivious vampire wives (one of whom is played by Monica Bellucci), who keep him a prisoner in Transylvania while the Count travels to London. Harker is such a dull, passive character that having a not-so-great actor portray him isn't such a bad idea. You don't worry that he will overshadow Anthony Hopkins or Gary Oldman, and he balances out their intensity with his banality. (I'm really not trying to insult Keanu Reeves. If you're reading this Keanu, I just want to thank you for The Night Before, a forgotten 80s teen classic.)

With Richard E. Grant as Dr. Seward, Cary Elwes as Athur, Billy Campbell as Quincy Morris, Tom Waits as Renfield, and Monica Bellucci as one of Dracula's vampire wives. 128 min. ★★★

Good review! The Keanu bits had me chuckling.