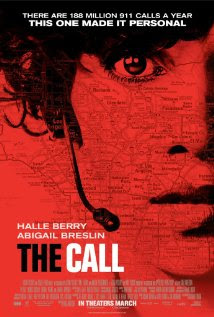 911 operator Jordan Turner (Halle Berry) is coping with a grim reality: a girl whom she was trying to assist was abducted and murdered. Six months afterward, another girl is abducted, and thus begins a long attempt to figure out who has her and where he's taking her.

The Call is a tense, often disturbing thriller: the kind that takes a perverse pleasure in messing with the mind of its audience. I've often explained that horror movies about zombies or vampires don't frighten me because they can't really happen (and they're usually fun), but movies about psychotic killers are another story. We seem to be inundated with them in real life, so a movie like The Call is frankly, an unpleasant experience at times. It goes back and forth between pleasurably tense and unbearably excruciatingly tense.

Unlike most thrillers, the murderer isn't hidden from us until the finale. We see his face early on. He's meant to be a terrifying figure, but not an unknown one. The Call reveals bits of information about his berserk psyche (something about an obsession with his sister, who died), and I suppose we're supposed to be even more freaked out by how the killer channels his grief and obsession. (I was quite put off by how the movie links grief to serial killing. There are plenty of people who don't jump right to murder because they can't cope with losing a loved one. The movie covers itself by making this guy a real sicko who already had an unhealthy fixation on his sister before she died. It's like he's Norman Bates and Michael Myers combined with Buffalo Bill from Silence of the Lambs.)

For lovers of the unashamedly disturbing show Criminal Minds, this is a fairly similar kind of experience. I didn't hate watching this--it holds your interest in a grisly, compulsive sort of way--but I don't ever need to watch again. (And there's an unnecessary set-up for a sequel if it's a moneymaker.)