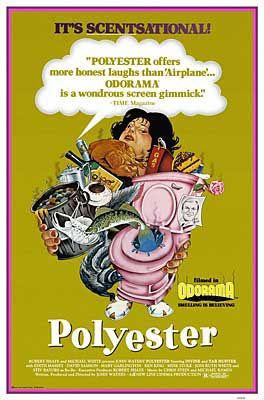 John Waters' first sort-of mainstream movie was Polyester (1981), a celebration of everything Waters loves: bad taste, bad melodrama, bad hairdos, and bad people. Divine stars as Francine Fishpaw, a suburban housewife living in Baltimore whose life is falling apart: her sleazy husband, the owner of an adult movie theater, is having an affair with his tacky, obnoxious secretary (Mink Stole), her daughter LuLu (Mary Garlington) is dating a scuzzy punk named BoBo, and her son Dexter (Ken King) is addicted to Angel Dust and has a foot fetish, which has morphed into a penchant for roaming around town stomping on the feet of unsuspecting women.

Polyester is funny up to a point, although it runs out of steam in the last third. It's perhaps a little too easy to turn suburbia inside out, and yet it's still amusing to see it happen, especially by someone like John Waters, who grew up in suburbia and constantly demonstrates his acute familiarity with--and enjoyment of-- the sordid private lives of middle-class Americans. What's most memorable about Polyester is that Waters shot it in "Odorama," a gimmick designed to emulate one of his cinematic icons, director William Castle (who was himself famous for an endless supply of gimmicks geared toward marketing his movies). For audience members to experience "Odorama," they were given a card with 10 "scents" on them, and whenever a number flashed on the screen, they scratched and then sniffed that particular number so they could experience the same smell as the star of the film. You can imagine where that one leads to.

Divine is at her most histrionic, the icing on the cake being her hilarious Liz Taylor wig. Tab Hunter co-stars as Todd Tomorrow, the handsome stranger who happens into Francine's life. With Edith Massey as Cuddles (Francine's only true friend), Joni Ruth White (as Francine's malicious mother), and Stiv Bator. The title song is sung by Hunter, and all the film's music was written by Debbie Harry and Chris Stein of the band Blondie, and Michael Kamen. 86 min. ★★½
by Jacob Lusk @ pannedreview
Email ThisBlogThis!Share to TwitterShare to FacebookShare to Pinterest
Tags 1981, Divine, Edith Massey, John Waters, Mink Stole, Tab Hunter