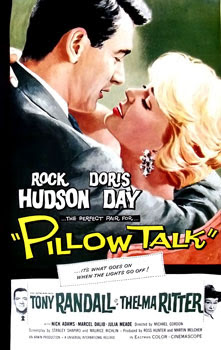 Like most romantic comedies of its era, Pillow Talk (1959) is about a woman's attempt to curb a man's voracious sexual appetite--or at least redirect it toward the monogamous requirements of marriage. It's a diverting confection in CinemaScope: Doris Day, Hollywood's biggest-selling virgin, plays Jan Morrow, a New York interior designer who's horrified by the man (Rock Hudson) with whom she shares a telephone line. He's got any number of women under his charms, and she's more than a little jealous of his active love life. Tired of her judgmental criticisms and constant nagging of him to get off the phone, Hudson's character pretends to be a chivalrous Texan after meeting Jan by chance at a restaurant. He's taken with her, or at least, taken with the idea of deceiving her (and possibly adding her to his list of conquests.)

Pillow Talk is about as realistic as a bad sitcom, but that's part of its charm. It's a series of late-night jaunts to New York night clubs and swanky parties, and long drives at midnight, full of banal-comic banter between Day and Hudson, who teamed for a couple more romantic pictures after this one was a big hit.

Doris Day has always been good at playing cookie-cutter American women who react with the appropriate level of revulsion at the slightest hint of impropriety (even though she's secretly hoping a little of that impropriety will point itself in her direction.) Rock Hudson proves his charm and appeal as a leading man. But does this complement ultimately mean I will have to stop making fun of Channing Tatum's acting? Isn't Tatum just the next Rock Hudson? Perhaps--fifty years from now--someone else will comment on Tatum's likableness, which I generally see as blandness most of the time.