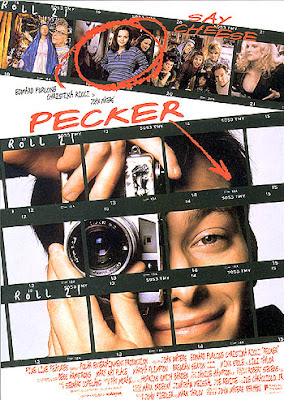 Edward Furlong as a budding young Baltimore photographer named Pecker who becomes the latest sensation among the arty metropolitan types after he's discovered by a New York art dealer (Lili Taylor). But fame and fortune completely disrupt his life--and in the process, his work--much to Pecker's chagrin.

In some ways, one might read into Pecker (1998) an autobiographical thread: writer-director John Waters started out making ultra-shocking low-budget films like Pink Flamingos (1972), which celebrated social anarchy and didn't have to adhere to any kind of censorship regulations. They were sensationalistic and edgy and even disturbing. After Waters found a bit of mainstream success with Hairspray (1988), it became harder and harder to make those kinds of movies. (Also, the midnight movie phenomenon of the 60s and 70s was dead, thanks in large part to the emergence of home video. The rules of the game, if not the game itself, had dramatically changed.) So Pecker has a bit of reflective resonance for fans of Waters, in the sense that notoriety and success had some kind of impact on Waters' career. Still, he's managed to make some pretty shocking stuff, and his most recent film (A Dirty Shame) earned an NC-17 rating.

Pecker (the name, by the way, isn't really used as a euphemism for 'penis', although you might have expected this from John Waters), also proclaims Waters' love/obsession for Baltimore, his hometown, which he portrays as eccentric, weird, unironic, and yet somehow beautiful and familiar and accepting. It's the anti-New York. (Pecker takes a picture of his dad, who runs a bar, in front of the cash register, with the 'no sale' sign in view as a joke, and the New Yorkers proclaim it as some kind of haunting celebration of poverty and economic hardship; the dad is dumbfounded at their pretentious ability to over-analyze things. In Baltimore, we take it to understand, things are what they are: weird and even disturbing, yes, but at least they're upfront about it.

Pecker is a bit uneven, but it's got the usual amount of Watersian flare and weirdness. The story, which feels lacking in any real conflict for nearly half the movie, doesn't sustain itself over the 86-minute running time, but Pecker is redeemed by a terrific cast who embody their characters with gusto and their own bizarre form of dignity. They include: Mary Kay Place (as Pecker's mom), Mark Joy (as his dad), Christina Ricci (as his girlfriend, the militant manager of a Baltimore laundromat), Martha Plimpton (as Pecker's big sister, a bartender and MC at a local gay bar), Brendan Sexton III (as Pecker's best friend, a devoted shoplifter), Mink Stole, Patricia Hearst, Jean Schertler, Lauren Hulsey, Bess Armstrong, and Mary Vivian Pearce. ★★½
by Jacob Lusk @ pannedreview
Email ThisBlogThis!Share to TwitterShare to FacebookShare to Pinterest
Tags 1998, Christina Ricci, Edward Furlong, John Waters, Martha Plimpton, Mary Kay Place, Mink Stole