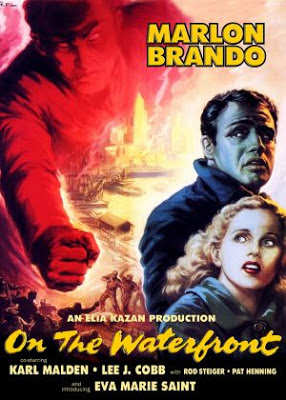 Given that the Academy shafted Marlon Brando and his brilliant performance in A Streetcar Named Desire (1951), his Oscar win for On the Waterfront (1954) might seem like a peace offering. And although it probably was an apology Oscar to some degree, there's no denying the power of his performance as Terry Malloy. Brando made being a thick-skulled bum endearing, courageous, dignified, and ultimately transcendent.

In On the Waterfont, he plays an ex-prizefighter whose brother Charlie (Rod Steiger) is an accountant for Johnny Friendly, the union boss who runs the New York harbor with an iron fist and doesn't care if he has to skirt around the law to do business. The corrupt union heads pick and choose who will work, and that means picking and choosing people they know won't rat on them. But when one of them agrees to testify against them, Terry is enlisted to help "lean on him," never suspecting that they intend to throw the would-be canary off the roof of a building.

Terry experiences, perhaps for the first time in his life, a moral conflict he cannot dismiss. He's faced with protecting vice over virtue, and battles not just Johnny Friendly (played with an appropriate level of nastiness by the excellent Lee J. Cobb) but himself in the process.