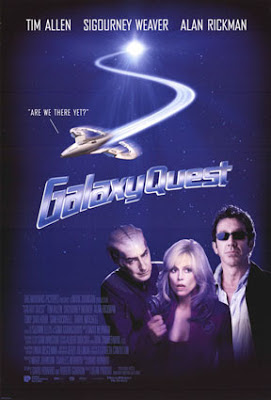 Galaxy Quest (1999) is pure stupidity, but in a good way. It's a tribute/send-up of Star Trek, but it sticks to its own story with surprising self-confidence. The plot is thus: the cast of an old TV show (called Galaxy Quest) hasn't moved on since their show was canceled: they're squeezing every drop of milk from the petrified teets of their show, which maintains a cultish popularity with the geek culture. But, there's one group of "fans" at the latest geek convention who take them completely seriously: aliens (who have taken on human form to blend in) who think Galaxy Quest was for real, and who seek the cast members of the show--whose characters are believed to be real people on their faraway planet--to help them defeat an insidious enemy named Sarris (I couldn't help but wonder if the name was a reference to the famous film critic). Thus begins an adventure which finally validates the has-been TV stars, all of whom finally taste the glory their characters experienced every episode.

It's like Spaceballs and Star Trek had a one-night-stand and ushered forth some kind of unholy comic sci-fi offspring.

As a non-scifi/fantasy fan, I probably didn't get as much gleeful amusement out of Galaxy Quest as was available to me had I had been one of the devoted. But it's still a fun movie. And "fun" is the ingredient that seems to be missing from so many movies of late, even in this genre. Last year's Prometheus is a prime example: it was a beautiful-looking film that feigned a sense of wonder and lacked any of the enjoyment of its genre. But Galaxy Quest, which stars Tim Allen as the show's commander--their very own Captain Kirk--and Sigourney Weaver, as the blonde technician whose character on the show needlessly mimicked the spaceship's computer whenever it diagnosed a problem, careens through the cliches of science fiction with breathless enthusiasm and an ardent, head-over-heels mission of comic self-indulgence. The supporting cast--including Alan Rickman, Sam Rockwell, Tony Shalhoub, Daryl Mitchell, Justin Long, and Missi Pyle--tries their damnedest to show us a good time, and they succeed most of the time.