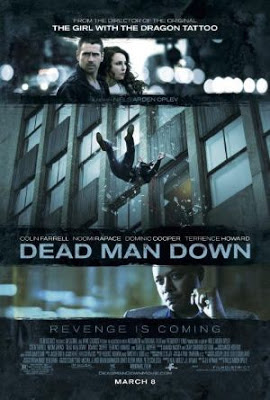 I was surprised by how much I enjoyed Dead Man Down, which stars Colin Farrell and Noomi Rapace as two strangers, both looking for revenge. Farrell plays Victor, whose wife and daughter were killed by gangster Terrence Howard's underlings, who left Victor for dead. Aided by the fact that none of them recognize his face, Victor joins their criminal operation as part of his elaborate plan to carry out vengeance. Rapace plays Beatrice, Victor's neighbor whose apartment parallels his; they meet on their balconies, and eventually she explains that she saw him killing someone, and needs him to kill the man who injured her in a car crash that ruined her face.

The screenplay by J.H. Wyman deserves much credit for making Dead Man Down a deliberately paced, exciting, intelligent thriller. I was expecting nonstop violence and carnage. (There are a few brutal scenes that feel gratuitous, but they're not as bad as you might have been expecting from the theatrical trailers.) Instead, this is a movie that seeks to actually explore a character's deep-set motives to kill. It's not a morality tale about the pitfalls of revenge, though. Much to its credit, this film sticks to telling its lurid crime tale.

Watching Victor's labyrinthine scheme unfold is a pleasure, even if the movie tends to be deadly serious at all times. (A little more humor would have lightened the mood considerably, but we seem to be living in an age where humor mustn't interfere with the ferociousness of the modern thriller, which seems impenetrable to anything that doesn't add to its moroseness.) Part of Victor's plan involves sending creepy packages to Howard in the mail, which include cryptic messages and small pieces of a photograph cut up like a puzzle. He's calculated his mind game to play out right down to the wire, and it's this aspect of Dead Man Down that makes it stand out from the usual drek.

Colin Farrell isn't particularly magnetic in Dead Man Down, but his dark eyes give him that jaded puppy dog look. He doesn't have to do much to elicit our sympathy. Dominic Cooper really shines as his buddy, a fellow new recruit to Howard's operation, who is himself a family man. Cooper's character seems a bit naive about the world into which he's entered, but he's determined to make a good impression with his boss, by doing everything he can to track down the person who's sending Howard those creepy messages. Noomi Rapace continues to exude a sort of enigmatic wistfulness. She's got some fire in her blood, though, and she lets a little of that come through her performance as Beatrice.